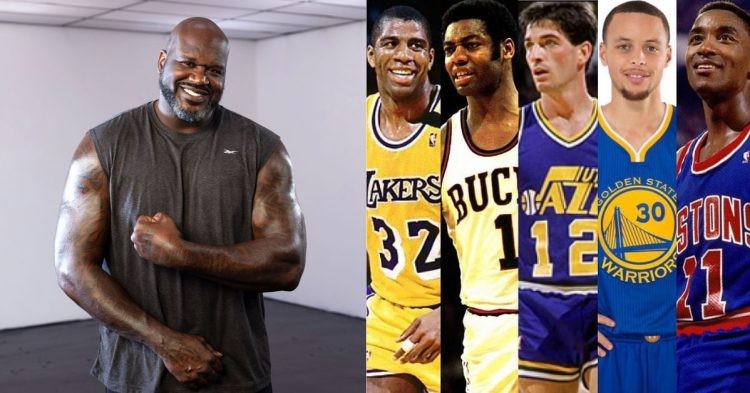 Shaq has always been a part of the NBA. His career in the NBA ended in 2011. Since then, he has been an entrepreneur, talk show host, and much more. Shaq’s opinions and voice amongst the players are valued much higher than the rest of the NBA media. O’Neal revealed his own Mount Rushmore for the best point guards in the NBA. He does so on the latest episode of his podcast.

Mount Rushmore is an imaginary platform symbolizing the top 4 players in history. It is a common term used to decide the best. Each person is allowed to have their own Mount Rushmore of basketball. Since there are so many NBA greats and talents, Shaq was asked to reveal his picks for the top 4 point guards. He has done this list for other categories in the past as well, such as Lakers Mt Rushmore, All-time Mt Rushmore, etc.

It is truly difficult to compare greatness across time and eras. The point guard has always been the position known for best court vision and passing abilities. This has been the criteria for a long time in deciding who the best point guard was. Moreover, a point guard is stereotypically the smallest player on the team with the most polished skill set.

Taking these factors into account, Shaq selected, without hesitation, Magic Johnson, John Stockton, Isiah Thomas, and Steph Curry. It is interesting to note that out of this list, Stockton is the only one without an NBA championship title to his name.

Magic was 6’9 and a freak at the point guard position. He was able to dominate against smaller guards and easily get past them with good court vision and incredible passes. Therefore, he is considered by many as the 1st greatest point guard of all time. Additionally, he also won 5 championships with the Los Angeles Lakers.

Isiah Thomas was the key cornerstone for the “bad boy” Detroit Pistons. He is perhaps the only other point guard in NBA history to lead his team to multiple championships with the exception of Stephen Curry. Isiah won 2 championships with Detroit. Additionally, they won back to back in 1989 and 1990.

John Stockton is the only point guard on this list without a championship. However, his other accolades give him a well-deserved spot. Stockton is perhaps the most well-accomplished over his career as a typical point guard. Therefore, he is ranked 1st in the all-time assists leaders with 15,806 assists in his NBA career. This gives him the right to join this list despite not winning an NBA title.

Steph Curry is the latest addition to this list for Shaquille O’Neal. He made GSW a modern dynasty on par with the “Kobe- Shaq” Lakers or the  “Michael Jordan” Bulls. Therefore, Shaq has given him a spot in this talented group.

Which NBA greats makes it to your Mount Rushmore of the best point-guards? Do let us know.