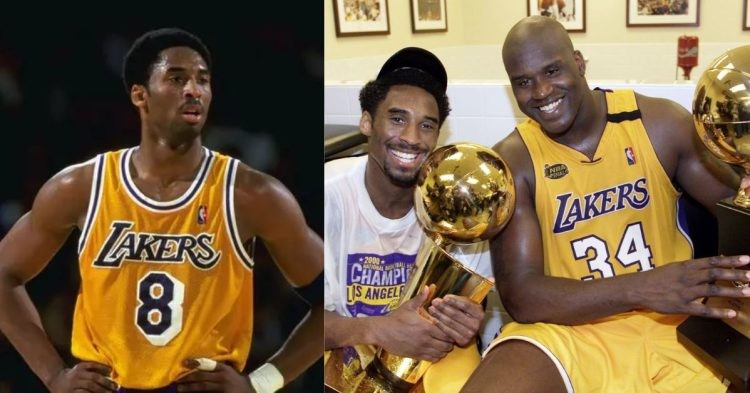 Kobe Bryant and Shaquille O’Neal are two of the most famous Los Angeles Lakers legends ever. They helped the franchise win 3 NBA titles in a row, essentially the first and only three-peat of this century. The only other team that has been able to accomplish the same in the modern era was Michael Jordan’s Chicago Bulls.

We already know that Kobe and Shaq had their differences. However, they never failed to show the other due respect when the occasion came. They both even sat down for an interview after their careers as players ended. During this conversation as equals and friends, they reminisced on the past glory days.

Shaquille O’Neal was most dominant player in NBA

The Los Angeles Lakers are considered basketball royalty largely thanks to these two stars. They were simply a perfect fit together and had playstyles that complemented the other well. Both of them agreed that Shaq was the one largely responsible for leading the Lakers to the finals, especially in the initial stages.

Back in the 2000 NBA Finals, the Lakers were facing Reggie Miller and the Indiana Pacers. This was the first real test for Kobe as he was still a young player. On the other hand, while Shaq had not won titles in Orlando, he managed to make the NBA Finals with them.

The series soon began and heading into a pivotal game 4, the Lakers were leading the finals series 2-1. Game 4 was in Indiana and a win there for the Pacers would mean the series evened out. Additionally, the Pacers thought they struck luck when O’Neal fouled out of the game.

That could not have been further from the truth. Kobe stepped up and sealed that game with a narrow 120-118 win over the Pacers in Shaq’s absence. Thus, Los Angeles took a 3-1 lead in the series and soon won when O’Neal returned for the subsequent games.

Kobe and Shaq knew what they accomplished. In that moment, Bryant said the words we have heard him say multiple times in his life, “ This is it fellas, what we worked all year long for man. Shaq the man! the most dominant player in the world.”

It is unfortunate that they did not try to settle their differences. Kobe has even claimed that he could have won 10 championships if he remained teammates with O’Neal.
Tags: Kobe BryantLos Angeles LakersNBAShaquille O'Neal
Previous Post