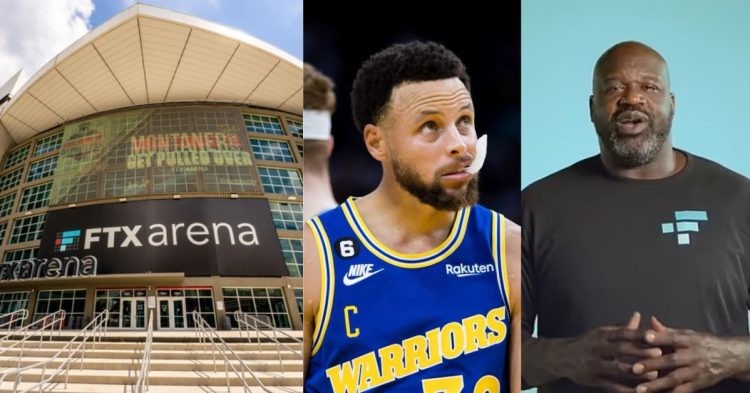 The news surrounding FTX has caught the entire world off guard. The company is under the spotlight and many have criticized the CEO, Sam Bankman-Fried. For those who don’t know, FTX recently declared bankruptcy. Many of its customers around the world had a go at them after investing billions of dollars. However, things have taken yet another drastic turn for FTX and its customers.

Very BIG names on the list of @FTX_Official’s official partners:

The company is currently under investigation after close to $1 billion of customer funds disappeared from the company’s accounts. In addition to that, a class-action lawsuit has been filed, and to the NBA world’s surprise, two of the biggest icons are included in the list. It is none other than Shaquille O’Neal and Golden State Warriors superstar Stephen Curry.

Want to learn more about crypto? As the world’s leading crypto expert, @stephencurry30 has got you covered…or does he?

The lawsuit states, “Part of the scheme employed by the FTX Entities involved utilising some of the biggest names in sports and entertainment … pouring billions of dollars into the Deceptive FTX Platform to keep the whole scheme afloat.” Both Steph and Shaq had featured in commercials for the cryptocurrency exchange company. Other big names in the lawsuit includes Tom Brady, Naomi Osaka, Miami Heat’s Udonis Haslem.

I teamed up with @FTX_Official to help make crypto more accessible for everyone. We have a whole lot planned and let’s start it off with a bonus. Use code SHAQ to earn $10 when you trade $100 on #FTX. Start the journey here: https://t.co/CFS9txvfzA https://t.co/K5ZDJjP9Pm

Apart from the biggest names in the NBA, FTX also has ties with the Miami Heat and the Golden State Warriors. As for GSW, the lawsuit mentions, “The partnership between the Warriors and FTX marked the first international rights partner for the Warriors, meaning the GSW and FTX had a visible market presence, inclusive of logo
and likeness, internationally.”

What caused the collapse of FTX Arena?

FTX bought the naming rights to the Miami Heat’s home arena last year. Since then, their logo and name have been stamped at the front of the arena. Once the company’s ongoing activity came to light, the franchise was quick to suspend its relationship with FTX. Their statement mentioned that “Miami-Dade County and the Miami HEAT are immediately taking action to terminate our business relationships with FTX.”

Miami-Dade County and the Miami HEAT have released the following statement pic.twitter.com/ERZo1IsZ2o

This meant that new companies were trying to land the naming rights to the new Miami Heat Arena. On the other hand, it seems like many sporting entities are cutting ties with the Bahamas-based company, apart from Heat. 8x Constructor Champions the Mercedes AMG Petronas F1 Team also suspended their links with the company and removed the logos from their Formula 1 cars before the Brazilian Grand Prix last week.

Shaq and Steph Curry have not commented on the ongoing saga as of now, and there has been no reported news of either suspending their relationship with the company just yet. We would have to wait and watch how this plays out for all the concerned parties.