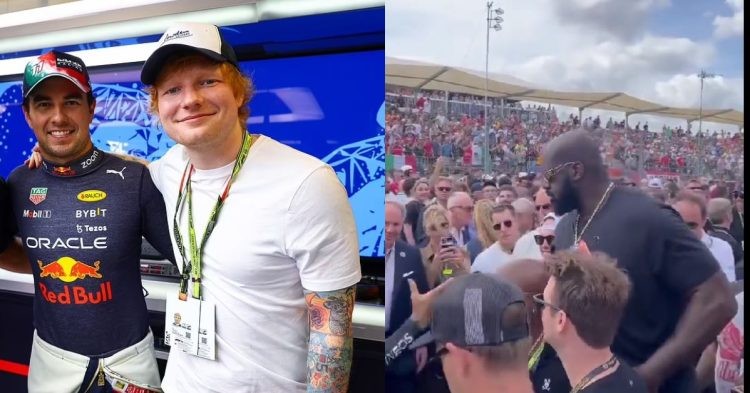 Los Angeles Lakers legend  Shaquille O’Neal might be done playing professional basketball. However, he is still a relevant figure and personality in the sports world. O’Neal was recently spotted at the F1 Grand Prix held in Austin Texas.

To those who are unfamiliar with what F1 is, it refers to Formula 1 Racing, one of the most entertaining and fast-paced racing sports in the world. The Grand Prix is one of the largest stages for the sport. As a result, the 4x NBA champion and several other notable personalities attended the event and were among the audience. We should wonder who these personalities are and what happened during this occasion.

Formula 1 racing is an opportunity for several car dealerships and racing teams to show they have the fastest cars and best riders in the world. The sport is home to some of the best racers in the world like Charles Leclerc, Luis Hamilton, Max Verstappen, and several others.

O’Neal revealed that he is a big fan of Luis Hamilton. In fact, when he was asked how big a fan of formula 1 he was, Shaq responded with “Luis Hamilton” in a small summarizing answer. Additionally, he was spotted at the Williams garage showing support for Alexander Albon.

Dutch reporter interviewing Shaquille O’Neal in the paddock in Austin:

He’s one of us for real, Shaq is such a legend 🫶 pic.twitter.com/AQQIkgoi3L

There are 10 teams that faced off during the Grand Prix. They are; Redbull racing, Ferrari, Mercedes, Alpine, McLaren, Alfa Romeo, Aston Martin, Haas F1 team, Alpha Tauri, and Williams. Most of these racing teams are also known for their car companies accessible to the general public.

A plethora of famous personalities was present at the event. Shaq, Ed Sheeran, Serena Williams, Brad Pitt, Madison Beer, and others attended the event. It seems Hollywood actor Brad Pitt was the biggest racing fan among them.  He was at the Grand Prix all weekend and didn’t miss the practice race leading up to the event.

While Shaq was certainly present by the Williams garage, there is no arguing that he truly wanted the Mercedez team to come out of the Grand Prix as winners. After all, they were the ones who Luis Hamilton is representing. The Lakers legend’s wish didn’t completely come true as Redbull Racing and Max Verstappen finished first with a time of  1:42:11.687. Hamilton was a close second, finishing 5.023 seconds later.