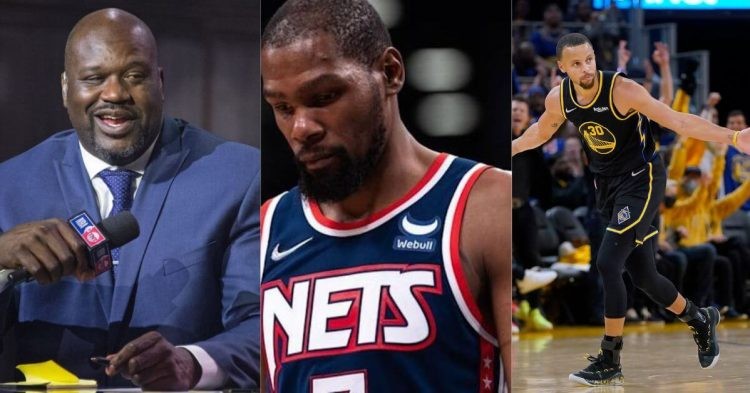 Retired NBA legend Shaquille O’Neal discusses all things NBA on “The Big Podcast with Shaq” with Spice Adams and Nichelle Turner. He gave his two cents about the recent comparisons between Stephen Curry and Kevin Durant when they shared the court as well.

Shaq was egged to choose who he considered to be a better player. However, he had no hesitation in revealing that he thought it was Stephen Curry. Many NBA analysts and sportswriters have Kevin Durant ranked higher in terms of all-time greatness in comparison to Steph. Therefore, Shaq’s conviction is noteworthy.

Everyone has an opinion on an issue. Kevin Durant’s contribution’s to the Golden State Warriors seem to have been diminished by the success they have had this NBA postseason. Additionally, Draymond Green has sounded off on how the Warrior’s offense runs around Steph and why he was always the one double-teamed.

O’Neal strongly stated that Steph Curry should be considered “more skilled” than Durant. Curry has been the face of the Warriors. It begins with claims of Steph being double-teamed much more and here are his exact words,

“I agree, See like you have to be inside this world or you have to understand the terminology. When Charles Barkley made the comment bus driver, bus driver means it’s all about you.. it wasn’t all about him [KD] it was about Steph… Yeah Durants a great player but he had a lot of freedoms playing with Steph and Klay”

Shaquille O’Neal went on to further criticize the 2x champion, “When he was in OKC he was the bus driver. People were on him when he couldn’t close and people ridicule him the man you cant close“.

Shaq questioned Nichelle on who she thought was a better shooter. She hesitated and replied, “They’re both good shooters“. O’Neal amusingly stated that she was taking way too long to answer that question and she finally accepted it was indeed Steph.

The 4x champion insisted on breaking it down further, “ His handles are not better than Steph, and Who has a better shot? and who can go further in the range?” The answer to all these questions was Curry.

One could argue that Shaq’s reasoning may be biased. However, his logic cannot be completely scoffed at. It is clear who Shaq thinks is the better player and why.

WWE Had a Bizarre Plan for The Judgment Day; Edge Against WWE Creative