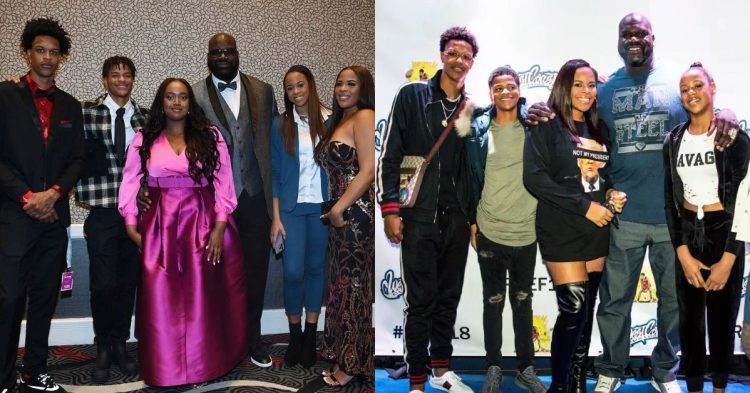 Shaquille O'Neal with his children (Credit- The Sun & US Weekly)

We have seen many NBA players who are public about the love they have for their families. At the same time, some players completely keep their personal life under wraps. Shaquille O’Neal fits into the first type. Since joining the NBA through the 1992 NBA Draft, Shaquille has always emphasized that family always comes first.

During his career as a player, Shaq dated two women. The former Orlando Magic youngster enjoyed a brief relationship with Arnetta Yardbourgh. After that, Shaq married Shaunie O’Neal, whom he had a turbulent relationship with. In addition to that, Shaunie is now married to Pastor Keion Henderson.

Apart from the two women in his love life, O’Neal also has children. All his children have accomplished plenty and have made their dad proud in one way or another.

Shaq’s oldest child is Taahirah O’Neal. The 26-year-old has followed in her dad’s footsteps to become a millionaire at such a young age. She currently works for PepsiCo as a Brand Communications and Community Engagement Analyst.

Shaquille has 3 sons, two of whom are basketball players and one is a rapper currently. As we all know, Shareef O’Neal has been in the limelight for a few years now. He currently plays in the G League. Despite trying hard to play for the Los Angeles Lakers, it seems like it wasn’t meant to be as of now.

I LIVE AND LOVE THIS 💩 pic.twitter.com/eOsmWf5HXb

The lesser-known brother who’s a basketball player is Shaqir. The 19-year-old is currently in school and plays for the Texas Southern Tigers. Despite his young age, Shaqir already stands at 6’7 tall and seems to be growing taller as time passes. Myles O’Neal is also one of Shaq’s sons.

However, the interesting fact many might not know is that Myles isn’t Shaquille’s biological son. Shaunie welcomed him to the world from a previous relationship before she met the NBA star. Since then, Shaq has adopted him and has made him feel like he is one of his beloved children. Unlike his brothers, Myles is a model and represented major brands like Under Armour, Dolce and Gabbana, and Givenchy.

Amirah and Me’arah are also Shaq’s daughters. Amirah is also a basketball player, just like her father and two brothers. She plays for Texas Southern University as a center. The 20-year-old was one of Shaq’s children to go public with her dating life, despite hilarious rules from her dad. On the other hand, Me’arah is also a basketball player, making 4 out of 6 of Shaq’s children end up playing the sport.

Shaq’s daughters Me’arah & Amirah O’Neal are straight buckets… There might not be a better sister duo in the nation pic.twitter.com/lveoP22ZUk

The 16-year-old plays as a center as well for the Crossroads School, Santa Monica. What’s interesting about her is that despite being just a teenager, Me’arah already stands at 6’3 tall. It seems like her dad’s genes seem to be working. Shaquille O’Neal has set many rules for his children in the past. But one thing he has been sure of is about accepting his responsibility as a father and guiding his children in any way possible.