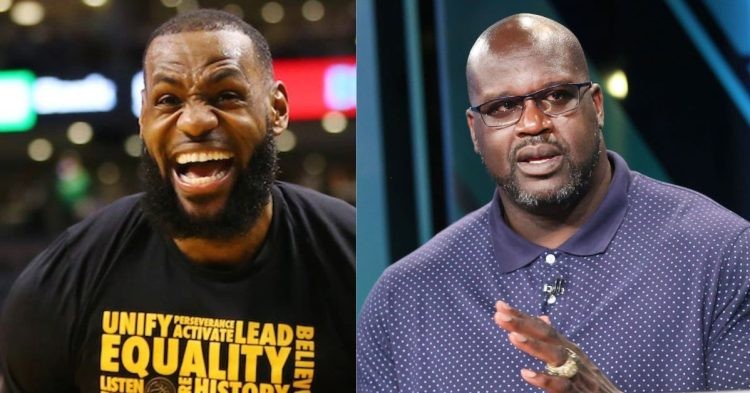 Former NBA legend Shaquille O’Neal is still an important voice and figure in the basketball world. He might have finished his career as a player. However, Shaq is still relevant as a sports anchor, podcast owner, and many other things. He recently got on an episode of “Drink Champs” alongside notable musicians like N.O.R.E and DJ EFN.

On the episode, they discussed the GOAT debate that has been raging for so long between Michael Jordan and LeBron James. We are already familiar with O’Neal’s stance on the situation and that for him MJ will always be better. Be that as it may, the Los Angeles Lakers legend recently revealed a fresh perspective on why LeBron James could be the NBA GOAT in his eyes by next year.

The GOAT debate never seems to end. This is because people always look at whatever factors suit their perspective or opinion when discussing the issue. Some look at accolades like championships, others look at statistics like points averaged or total points scored. Therefore, it becomes difficult to back a claim with undisputed validity.

Shaq revealed that he feels surpassing Kareem Abdul Jabbar as the NBA’s leading scorer would finally earn LeBron the recognition as the GOAT. Moreover, O’Neal also attempted to draw parallels between himself and his situation in the past with other NBA greats like Bill Russell and Wilt Chamberlain.

“So who’s the most dominant big man?… When people say those names I don’t mind. But if I would have passed up Wilt Chamberlain in points? I would have come up and said No Me! Only because I passed him up in points. it’s me and I don’t wanna hear nobody else’s name. But he got more points so…”

This is certainly an interesting take. Maybe we should look purely at the numbers in order to decide who is the better player as opposed to accolades like championships. That is because roleplayers or insignificant NBA players could procure several titles by simply being on the right team at the right time. Thus, Shaq used this logic to claim that LeBron is definitely allowed to feel superior to the rest of the NBA greats.