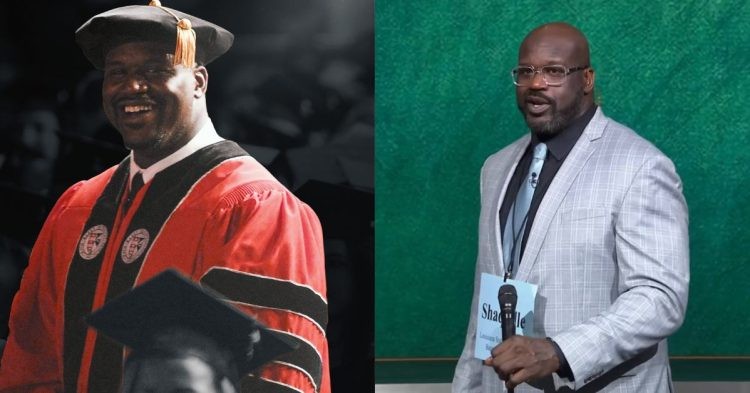 There have been many NBA players who have made a huge impact on the league. However, there are certain individuals who still have the same impact right now as they did during their player career. One such player will be the great Shaquille O’Neal. The former LA Lakers star has made a name for himself as one of the greatest players.

Shaquille is a huge businessman as well. He utilized the platform his playing career gave him. Shaq was smart enough to turn hundreds of millions into a business empire of the court. His net worth stands at $400 million as of 2022. Apart from being a business tycoon, O’Neal is also an educated person.

He has always publicly emphasized the importance of education. In the past, the 50-year-old mentioned that his children would have to focus on education in order to benefit from his riches. In addition to that, Shaq has also boasted about his educational qualities very recently.

How many degrees does Shaquille O’Neal have?

If we run it back to the time Shaq featured on Inside The NBA’s Spelling Bee Competition, DJ Diesel would have let the world know of what to expect from him. The host played a video of a young Shaquille O’Neal asking someone if they could spell the world “Podiatrist”. When Shaq was asked to do that, he said, “You really want to test my four degrees?”

Right after that, O’Neal went ahead to spell the word with ease. He also walked off the stage to go back to seat immediately and left Kenneth hanging. Shaq’s hilarious time at the mic prompted a fan to comment, “Shaq really went from saying “I got 4 rings” to sayin “I got 4 degrees” lol.”

Since many may not know, the former Lakers center does have a few degrees. He received his Bachelor’s from Louisiana State University in 2000 when he was a young player in the NBA. Afterwards, O’Neal managed to attain a Master’s degree from University of Phoenix.

Many have assumed that Shaq has a Ph.D. However, the real story is that he does not have a P.h.D, but Shaquille did receive an E.D.. An E.D. degree is provided to those who want to apply their knowledge in the real world where education is emphasized on. O’Neal received the Doctorate’s degree from Barry University with an exceptional 3.8 GPA.
Tags: NBAShaquille O'Neal
Previous Post