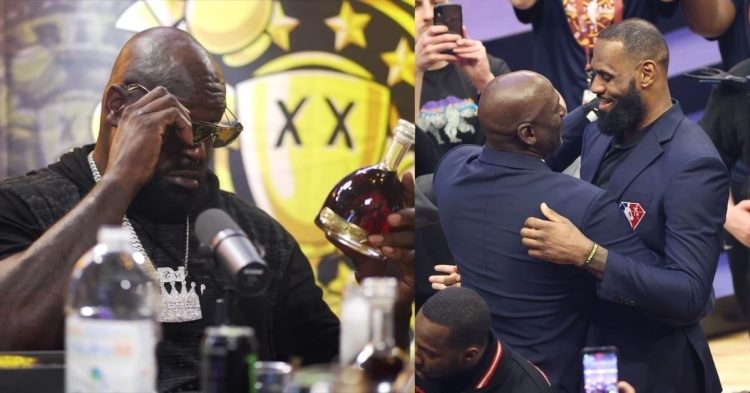 Shaquille O’Neal is widely considered one of the greatest big men to ever play basketball. He is a 4x NBA champion and helped the Los Angeles Lakers three-peat alongside the late Kobe Bryant. Shaq was recently a guest on the show “Drink Champs” alongside Victor James Santiago Jr (N.O.R.E) and Eric Fernando Narciandi (DJ EFN).

As you could have guessed both these people are famous DJs and musicians as well as avid followers of the NBA. They all discussed the infamous GOAT debate revolving around Michael Jordan and LeBron James. During the course of the interview, N.O.R.E made a claim that O’Neal had a priceless reaction to. We should wonder what he said and how the NBA legend responded.

Shaquille O’Neal checked what N.O.R.E is drinking when he claimed LeBron James is more powerful than Michael Jordan

Considering that the show is called “Drink Champs“, there was an abundance of alcohol present during the event. Both N.O.R.E and DJ EFN actively entered the GOAT debate with Shaq. It seemed like O’Neal agreed with what N.O.R.E was saying up until a certain point.

“To me, the reason why Jordan was the best ever is because he won. He never really lost. But the reason why the truth for me, is I like people who go through adversity and I think LeBron is the best ever. Because I really believe the stuff that LeBron does Jordan cannot physically do. There are two different sides…”

Shaq must have thought that what N.O.R.E said was absolutely ridiculous. Therefore, he moved to pick up and examine the bottle of alcohol that the musician was consuming. This brought about a roar of laughter from the audience and made N.O.R.E further justify his picking King James.

“LeBron from me I love the assist game the rebound game scoring points he doesn’t mind letting someone else score as he assists. Whatever the case may be.”

O’Neal is certainly allowed to think this is a ridiculous statement to make. However, we should not forget that LeBron James is listed as a taller and bigger player than Michael Jordan. Therefore, claiming Jordan can’t physically do what LeBron does is not all that inaccurate.
Tags: LeBron JamesMichael JordanNBAShaquille O'Neal
Previous Post