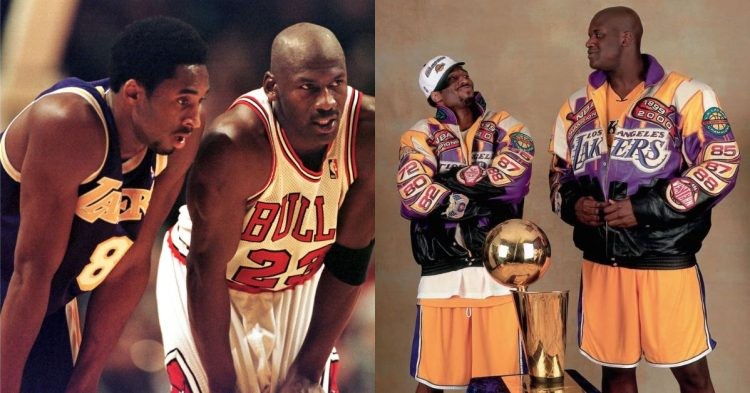 When we think of formidable duos in the NBA, there are many names that come to our minds. But two players to definitely be part of the best would be former LA Lakers stars Shaquille O’Neal and Kobe Bryant. Despite the rift between them according to numerous reports at the time, both of them always complemented each other.

The duo won three titles together, (2000, 2001 & 2002) at the Lakers. What was more special was that it was a 3-peat that they achieved together. When they played together, many reports claimed that the relationship between the two was strained. Fans started hating on Shaq as many thought Kobe didn’t like the fact that his star center was ‘lazy’.

However, it seems like they needed each other to succeed. O’Neal left LA in 2005 after the team lost to the Detroit Pistons in the 2004 NBA Finals a year prior. They did win titles after that at different teams but Shaq and Kobe could not replicate the success they had together at the Lakers. In recent times, the 50-year-old has revealed many interesting details about their relationship as he told the real story.

Kobe’s success meant that people were always going to compare him with the best of the best. With that said, Shaq recently received a question on a new episode of Revolt’s Drink Champs, on what makes The Black Mamba different from the great Michael Jordan.

He said, “You see Jordan and you see the competitor. But Kobe was a different animal. Like I used to see Kobe dribble and shoot, without no ball for an hour, and then go out there and do the same move.”

Speaking of the differences he had with his old teammate, O’Neal added, “me and Kobe had similar attitudes. Like Kobe wanted to be the best-ever, I wanted to just be the best at killing you. Because I was never the guy that’s, ‘oh he’s the best big man’, I want to be the most dominant man.”

Shaq may not have said much about His Airness and his ability. But if we’re being honest, no one can ever doubt for a second that he is arguably the GOAT of the sport. He has won 6 NBA championships as The Black Mamba won 5 throughout his career. However, Bryant’s old teammate seems to believe that the late star wasn’t a normal player.

He was a ‘different animal’ who only wanted to be the best-ever. On the other hand, MJ had the competitive nature in him but Kobe had something different. He dreamed of becoming the best every day. Shaq’s claims of Bryant training even without a ball should speak at length about his mentality back in the day.
Tags: Kobe BryantMichael JordanShaquille O'Neal
Previous Post