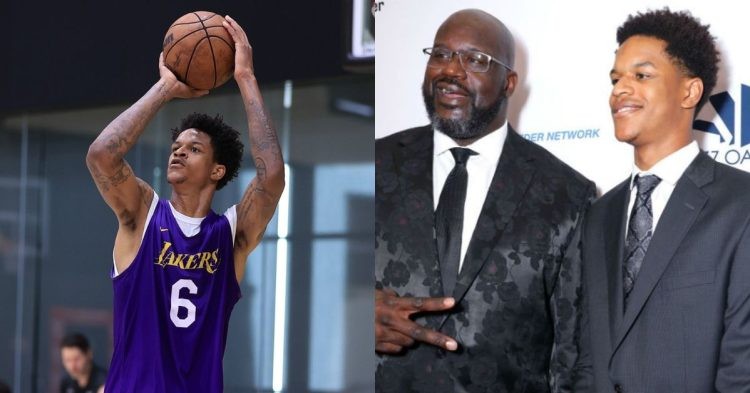 On the 23rd of June 2022, the brightest and best talents will be allowed to be drafted into the best league in the world. This draft can change the future of franchises for better or for worse. It all depends on the players they draft and if they’re ready. However, Shaq does not believe his son Shareef O’Neal is ready to take on the NBA.

Paolo Banchero and Jabari Smith seem to be the names that headline this draft. The top 2-picks in this draft are power forwards. The Orlando Magic have the number one pick in this draft. They have only won the draft lottery 3 times in the history of the franchise and all 3 of them were Hall of Famers. Safe to say that their track record cannot be questioned.

The last time the Magic had the first pick in the NBA draft and there was an O’Neal in the draft class we saw an all-time great begin his career. His son, Shareef O’Neal is not even close to being the talent his dad was but he’s still a name in the draft class.

Shaq does not believe Shareef O’Neal is not ready

Shareef O’Neal is a 6 foot 10, 220 pounds 22-year-old forward. Being the son of a former NBA great helped him gain genetic advantages. However, his basketball ability did not get sent over.

Shareef O’Neal was born in the year that Shaq and Kobe were dominating the NBA. He gained a lot of media attention despite his basketball ability. He wanted to succeed in the big shoes his dad left him. And also continue the legacy Kobe dreamt for him.

But in his 3 seasons with LSU, Shareef is averaging a meager 2.6 points, 2 rebounds, and 0.1 assists per game. These averages would not get him in most lower-level international leagues, let alone the NBA. His poor performances have been a result of the miraculous return he made after having to undergo a life-threatening open heart-surgery and various foot injuries.

“We kind of bump heads about this process…He wanted me to stay in school. I wanted to better myself through this. He knows I’m working out with teams. But I’m not going to lie, we ain’t talked about this. I’m kind of just going through it. He didn’t do any pre-draft workouts, he just got straight on, so it’s a different grind. He didn’t want me to do this, and I know he probably doesn’t want me saying this, but sorry. We’re both grown, we’ll get past it.”

Shaq clearly loves his son but believes he’s not ready. However, Shareef is just as strong willed as his dad and is not willing to bow out.  Will Shareef O’Neal be drafted by any team in the NBA?

Why Did Serena Williams Play With Face Tape on Her Tennis Return at Eastbourne?