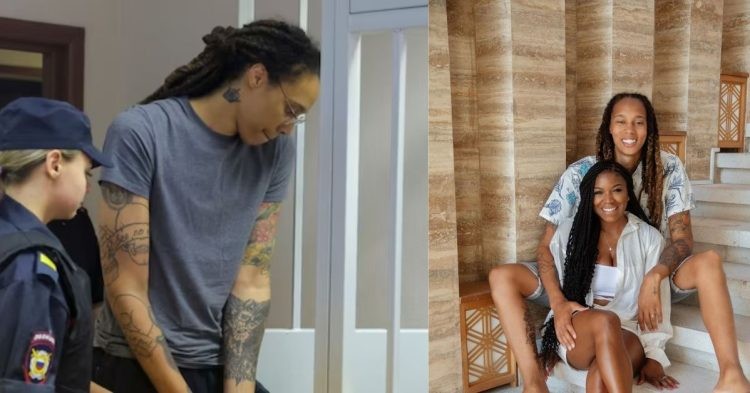 Brittney Griner sitting with her wife Cherelle Griner and her in Russian prison (Credit: Twitter)

Many of us are already aware that WNBA star Brittney Griner has been arrested. She is currently doing 9 years’ worth of prison time in Russia. She is married to a woman named Cherelle Griner, who recently shared that she received the most disturbing phone call from Brittney inside a Russian prison.

Considering that nothing has come to fruition other than talks in terms of her release, we should want to know details concerning the WNBA star’s state of mind. After all, it is easy to sit and blame her or claim to have sympathetic feelings. However, very few of us actually know what is going on and what everyday life is like for Griner. Therefore, we need to pay attention to Cherelle’s narrative.

Where is Brittney Griner kept in Russia?

We thought Griner would be kept in a prison cell. Therefore, It shocked us to find out that she was transferred to a Russian Penal camp. Some have theorized that this is an attempt to negotiate a potential prisoner swap.

Cherelle Griner was recently interviewed and spoke about how conversations with Brittney. Here is what she had to say.

“So the first conversation, it was just so delightful just to hear her voice at that point I was like you know what I think she’s okay we can survive this. The second phone call? I just the minute I hung up I think I cried for 2-3 days straight I did not get outta my bed. it was the most disturbing phone call I’ve ever experienced and I’ve known BG 11 years…”

Cherelle Griner is in the fight of her life to bring home her wife, Brittney Griner, who’s been sentenced to nine years in prison.

She fears the worst: “I don’t know if she has anything left in her tank to continue to wake up every day and be in a place where she has no one.” pic.twitter.com/WR4fm5RRUt

She was then asked by the interviewer at CBS News to share what has disturbing about this second phone call. Cherelle shared a generally gloomy picture of what it was like.

“It was her like you could hear it. You could hear that she’s not ok you know if you just think about a person suffering…you could hear that she was at the max that day and I’m like god and there was nothing I could do and I’m sitting there and I’m just like….I’m just sitting on the phone and it’s just the most still moment I think I’ve ever shared with my wife….I don’t know if she has anything left in her tank to continue to wake up every day and be in a place where she has no one.”

This is truly quite troubling to hear. Moreover, her conclusion is quite poignant Not many people know what it is like to be truly alone and scared.