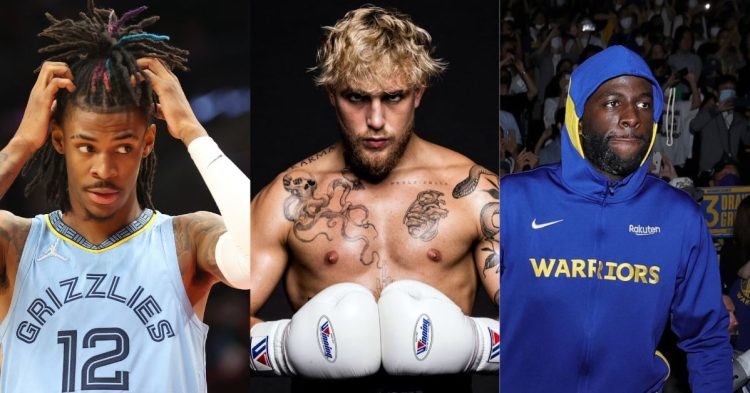 The defending champions, Golden State Warriors, have locker-room tensions even before the start of the 2022-23 season. Although Stephen Curry mocked ESPN for insulting predictions for the season, they seem to be coming true. Draymond Green and Jordan Poole were seen throwing hands at each other during practice and the NBA World had a lot to say about it.

Superstars like Ja Morant, Trae Young, and Isaiah Thomas reacted to the clip showing Draymond Green brutally punching his teammate Jordan Poole. The video also grabbed Jake Paul’s attention, who wants to see Draymond Green in the ring and will probably pay him millions of dollars to do it. If he quotes the right amount, we might as well see the 3x all-star in a ring.

Draymond is tryna get to LA.
Damn ! 😳

Gotta get Draymond Green in the boxing ring.

While other NBA stars addressed the clip discretely, Isaiah Thomas directly attacked Draymond Green for his behavior. The 4x champion took JP down with one blow and it did not look pretty. Fans could see tensions brewing since last season and the lucrative contract extension may have something to do with Poole’s attitude and Green ultimately punching him.

He’s gonna have to see me every time after this sucker punch. Damn. That ain’t it! And whoever leaked this should be fired too https://t.co/UCwNorEEya

The locker-room disaster came to light yesterday but no one knew the severity of the punch. Warriors GM, Bob Meyers told the media that Draymond Green accepted his mistake and apologized to the whole team for his actions. Jordan Poole was present in the room as well.

The video of the incident was leaked by somebody within the organization to TMZ. Green and Poole were off the court exchanging some words. Although we can’t hear what they’re talking about, it was Jordan who made the first move. He pushed Draymond and the latter in turn punched him brutally.

Poole is no longer a rookie who can be pushed around. He was an integral part of the team last season and the massive leap made him desirable across the league. JP was a MIP candidate last season and single-handedly retained the #3 seed for the Warriors last season.

Even if there was a change in Poole’s attitude after signing the contract extension, Draymond disturbed team dynamics by getting physical. He will be a very important piece if the Warriors want to repeat this season. Green had a similar altercation with Kevin Durant in 2019 and the latter left them the next season. Somehow, Draymond is always responsible for the Warriors losing good talent.