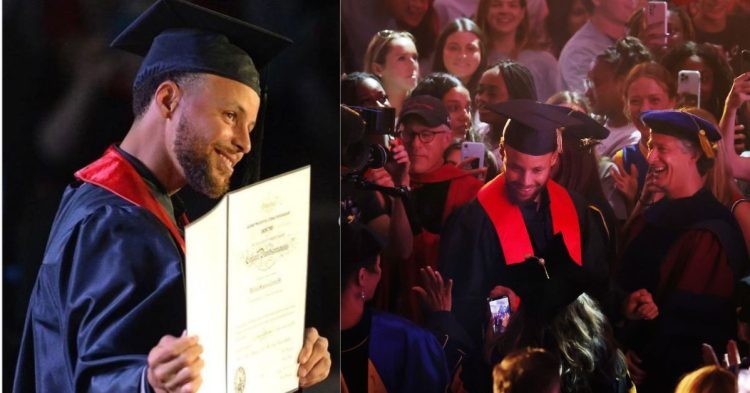 Golden State Warriors point guard Stephen Curry finally graduated from Davidson College and received his diploma. This is a significant milestone in his life and he was surrounded by family and close friends for this occasion. The NBA superstar shared a post on Instagram dressed in his graduation robes.

Athletes are stereotyped as lesser intellectuals by certain people. After all, they dedicate their whole life and effort to a physical task. Therefore, Steph shattered these same stereotypes and proved that he gets the job done. It is important to know what Chef Curry felt and understand his emotions over this much due accomplishment.

This was no ordinary college graduation for the NBA’s golden boy. He was honored by his former college and his jersey #30 was retired and hung on the rafters. We all know that NBA greats usually earn this privilege only several years after retiring from the sport.

Obviously, a college retiring a star student’s jersey is not the same as having a franchise do so. Or perhaps even the whole league, like in the case of Boston Celtics legend Bill Russell. Nonetheless, it is still quite an honor for anyone and Steph revealed how he felt in the caption of his Instagram post.

“Some things are worth the wait! #30 up in the rafters looks right! Humbled and blessed to be up there with the @davidsonwildcat legends.”

Thus, Curry went on to conclude, “It’s ALWAYS a great day to be a Wildcat.” Some of us are familiar with Curry and how his journey to the NBA began. Since he was not the most gifted athlete, he was not scouted by many top-tier basketball colleges.

However, Davidson, who selected Steph soon realized they recruited a diamond in the rough with a future NBA star. He remained loyal to his college, much like he has remained loyal to the Golden State Warriors so far in his career.

To those interested, Stephen Curry graduated with a Diploma in Sociology from Davidson. Since he is already quite the voice for social change, this is quite appropriate.