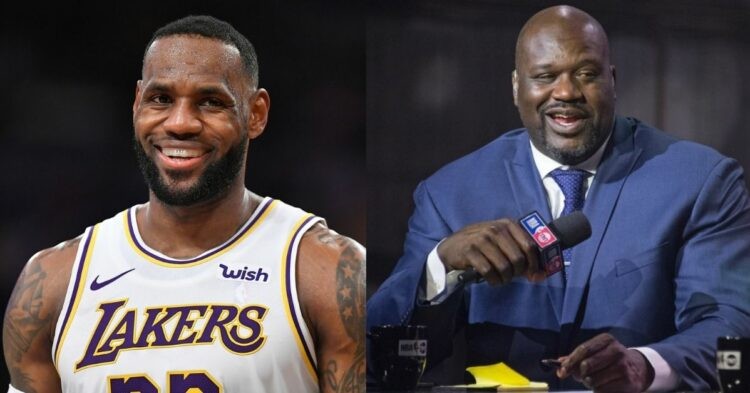 LeBron James is one of the greatest ever. His length of dominance in the NBA is something else. King James has come off a year 19 better than we have ever seen before. Additionally, his play in year 19 can be compared to Shaquille O’Neal.

Shaq is a former NBA center and one of the most dominant and unstoppable forces the game has seen. King James has been as efficient as Shaq from inside the three-point line.

LeBron has had a historic year 19. He has averaged 30 points, 8 rebounds, and 6 assists this season. However, the remarkable aspect is his efficiency this season. There is a huge reason LeBron is able to dominate the paint.

The LA Lakers had arguably the weakest players at the center position in their roster. They had Dwight Howard and DeAndre Jordan. These are two veterans on the back end of their careers. Additionally, Anthony Davis was injured for several stretches.

Therefore, King James was able to dominate the interior. He is 6’9 and at least 250 lbs. Even in this stage of his career, he is able to tussle with the NBA centers.

LeBron James has also refined his game over the years. Otherwise, he would not be able to score at 62% inside the three-point line. He uses both his smarts and his strength to outplay his opponent and find an effective way to score.

Shaquille O’Neal rarely shot the three-pointer. However, LeBron James found this required in his offensive arsenal and has shot 35% from the three-point line this season. This has reduced his overall field goal percentage to 52.4%.

That’s the highest 2PT% for a 30 PPG season in NBA history, nobody else has shot above 58.0%. pic.twitter.com/isk915kMkf

LeBron shooting 62% also shows the level of his athleticism. It is almost unreal for a player to get better towards the back end of his career. Therefore, it is unfair to expect LeBron to match this level of play in the coming years.

Shaq was about 58% throughout his career, just a few ticks below king James. However, in all fairness, Shaq would have had a much higher field goal percentage if the opponents never fouled him out of desperation.