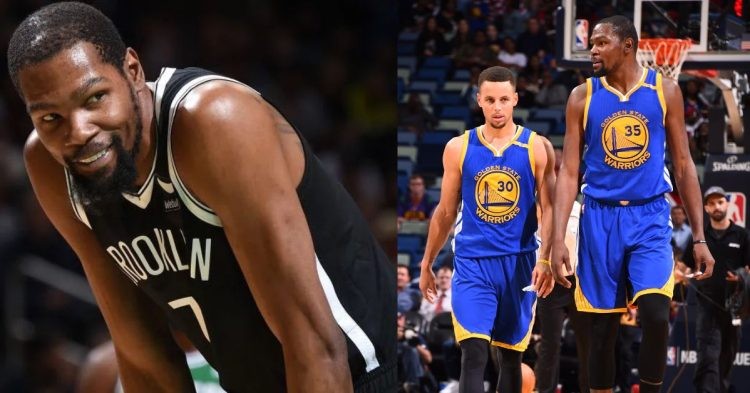 The NBA free agency has sparked a rumor frenzy. One player that has been in the headlines for the past few days is Brooklyn Nets star, Kevin Durant. KD submitted a trade request a couple of days ago, and it started a series of reports. It was in fact a surprise that he did that despite Kyrie Irving committing to stay with the Nets.
What is the reason for Durant’s request? This is not the first time he has done something like this. Back in 2019, he wanted to leave Golden State. Although they didn’t win the title that year, the team they had was actually a contender to be champions. He later mentioned that he felt like it was time for a new challenge.
Similarly, KD might be after a new challenge this year. After all, the Nets have had their fair share of drama in the last few years.  After his request, many teams were eyeing up acquiring his services. One of the teams that were reported to be interested was the Golden State Warriors.

He left his former team in 2019 after winning two consecutive championships with them, and two back-to-back Finals MVPs in 2017 and 2018. One of the main reasons he left was the fallout with Draymond Green, according to reports.
GSW have just won their 4th title in 8 years. Fans have also pointed out that they managed to get a chip without KD, who was vital for their wins in 17’ & 18’. The team struggled for form and was finding it difficult to win titles with their main players injured. Stephen Curry and Klay Thompson were two of the main players that were sidelined. These factors could play a role in whether Durant moves to the Warriors this summer.
There have been rumors about whether the Warriors could go for Kevin Durant again. However, the Warriors players will also have a say in it. According to Marcus Thompson, the move to The Bay is unlikely for Durant. However, if the important players of the team agreed to it, it could be possible.

But some key figures would be open to it if somehow the stars aligned again.https://t.co/bd4FGtuSaf pic.twitter.com/zYLenVzGc1

We all know Draymond, Steph & Klay are the faces of the Warriors, with Wiggins climbing up the ladder this year. They are significant figures of the team as they aim to keep the team together. The trio is reported to be open to a KD return, according to TheAthletic. Reports also say that they have been speaking to Durant as well.
Who wouldn’t want KD on their team right? He is still one of the best players in the world in his position today. However, if the Warriors choose to go for him, they should be able ready for his antics. Many young players have joined the team. Durant should be ready to work with them to help the franchise defend the title.
Previous Post