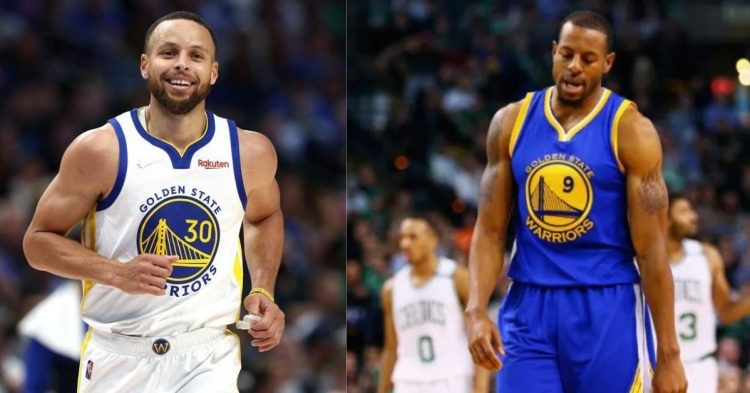 Andre Iguodala might be at the back end of his career. He will be entering Year 19 this season with Stephen Curry and the Golden State Warriors. Veteran NBA fans will remember Iggy was pivotal to GSW’s deep postseason runs of the past. Thus, they decided to resign him again last season from the Miami Heat.

We were all unsure if Iggy was planning to retire heading into this season. Not many NBA players last a full 15 seasons in the NBA, let alone 19 years. Andre Iguodala could have retired but didn’t do so. He was asked about what led him to come back for another year. Iggy revealed the people responsible for his decision to stay.

While Andre might not be the player he once used to be, there is no arguing that he is still a useful player for GSW. Therefore, it would make sense to keep him on the roster for the sake of his experience and input. Veteran NBA players who have been in the league for a long time are also excellent locker room members.

As a result, even Stephen Curry is quite fond of Andre and did not want him to retire. Igoudala described how his decision to stay went down and how Curry was responsible.

“I’m going to blame a few people, Stephen Curry is the one person I’m going to blame. But as a group, I’m blaming Draymond, Steph, and Klay. Steve Kerr a little bit and Bob Meyers… I think they just showed me a lot of love, you know what I mean? They really helped me see my presence outside of physically playing basketball.”

“I’m letting you know Steph, this is the last one.”

This is very well put by Andre Iguodala. One can only imagine how difficult it is for someone to go from being a star player to a voice on the bench. It would be no surprise if they found it difficult to “see their own presence” as they would not be playing big minutes for the team.

Nonetheless, Steph and GSW know their chances of winning are greater with Iggy on their side. Thus, they all convinced him to come back for the next season.