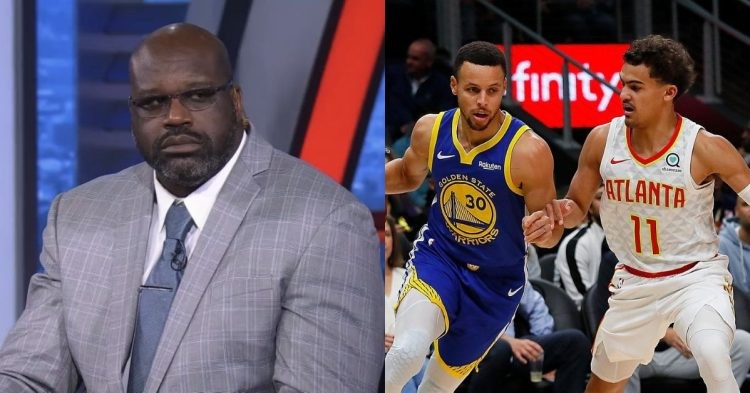 The NBA currently has many young stars who are world-class. Atlanta Hawks star Trae Young is among those names. He has made a name for himself in the NBA. Young surely has the potential to win the NBA championship in the future, along with other individual accolades. Since the Hawks acquired him in 2018, Trae has averaged 25.3 points, 9.1 assists, and 3.8 rebounds in 303 games in his NBA career.

The American’s playstyle and scoring abilities have prompted fans to draw comparisons to the great Stephen Curry. The way he takes a game on his own seems to be reminding the NBA world of Steph who does the same with such ease. Apart from fans, Trae has impressed a former NBA player as well: Shaquille O’Neal.

Is Trae Young as good as Stephen Curry?

Shaquille isn’t one to always applaud NBA players. But the fact that he has gone into detail about what makes Young different speaks at length about his abilities.

During “NBA on TNT“, Shaq said, “I love this kid, because I’ve been watching him as a youngster. First saw him on YouTube. And he lives for these moments. Get in his face. ‘You overrated’, like you talk smack to him, he just, ‘okay, watch this’. Steph Curry-like. I love this kid, and I love his heart, he’s really doing a good job of letting the game come to him and keeping his guys involved.“

As O’Neal claimed, Trae seems to use the hate he receives as fuel. For example, he has received plenty of hate from New York Knicks fans in the past. The Knicks-Trae Young hate story is one of the most famous ones in the NBA. However, despite that, Trae has been sensational against that particular team. He has averaged 28.7 points, 9.4 assists, and 3.2 rebounds in 13 games against the Knicks. He has also had four 40+ point games against them.

In addition to that, Shaq also said, “He’s my second favorite player because I like that he lives for these moments.” The former LA Lakers star seems to be a huge fan of the young player. This wasn’t the first time Shaq has displayed the utmost confidence in Trae.

In the past, he asked Young how long it would take for him to surpass Steph as the best shooter in the league. The fact that he asked Trae shows how much he believed in his abilities. Although Trae may not be close to Steph, it is quite evident that he holds his ground against the league’s best. And as Shaq said, Trae does shut his critics up, just like Curry.