“Steph Is Done, He Is Getting Older” – Shaquille O’Neal Opines Why the Golden State Warriors Are So Dominant Despite an Ageing Roster 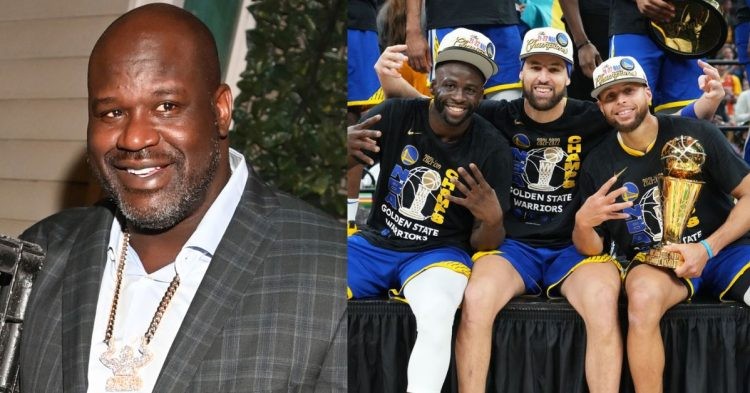 In the recent episode of “The Big Podcast with Shaq“, the 4-time NBA Champion Shaquille O’Neal shared his thought on Steph Curry and Golden State Warriors’ emphatic win over Boston Celtics that saw them become a 4-time NBA Champions in the last eight years.

O’Neal knew that the Celtics were favored by many to win the series. They were considered the younger, more athletic, and physical team. Moreover, it felt like they went through a tougher path to get to the NBA Finals in the Eastern Conference. They had Jayson Tatum and Jaylen Brown, two players just entering their prime.

Despite all this, the Celtics were eliminated by the Warriors in 6 games. Shaq shared his reaction to this news on the latest episode.

The 4x NBA champion was asked what he thought of the Warriors winning 4 titles as well. Shaq responded in detail to explain what has made the Golden State Warriors such a dominant dynasty. Moreover, it is quite a rare sight to see him share praise of this level. Therefore, GSW must have truly impressed him with their play this season.

“Golden State has the old school mentality with the new school spirit, the reason why they mastered this new school spirit is they created it. The way they play is how everyone in the world is playing right now… You have guys that were on top of the mountain, they won 3… a couple of years go down… us critics we do what we do, Steph’s done he’s getting older… and it just causes them to get hungrier because they have the championship blueprint“.

Shaq put it well. It is true that no one expected the Golden State Warriors to make it back to the NBA Finals after the 2019 loss. Kevin Durant leaving the team and Kawhi Leonard moving to the Los Angeles Clippers also drew attention away from the Warriors to compete for a championship again. However, they have disproven the haters and have made it back to the NBA Finals. Furthermore, this is within a small time window of fewer than 3 years.

Shaq thinks GSW made good moves from the shadows

Steph and the Golden State Warriors were in the 2019 NBA Finals without Kevin Durant. However, they were eliminated in 6 games by the Toronto Raptors. This led analysts to consider that GSW’s age of dominance was over. The LA Lakers and Phoenix Suns, who won in the West in the following 2 years, were given much more importance by the media.

The GSW management did not believe their title hopes died with the leaving of Kevin Durant. Thankfully, he chose to leave via “sign and trade“. Therefore, GSW was able to receive D’Angelo Russel from the Brooklyn Nets.  This turned into a trade for Andrew Wiggins as Dlo was soon traded to the Minnesota Timberwolves.

“They have the championship blueprint, and then you bring in one little piece Andrew Wiggins, you bring in another little piece Gary Payton Jr bring in those little pieces with those big 3 that have that winning mentality, all you need is health you need togetherness health and some dawgs, and those 4, 4.5 dawgs that they have… I knew they were going to win the whole time.”

The GSW “dawgs” as Shaq calls them certainly stepped up in these playoffs. Steph was indeed spectacular. However, without all these defensive-minded and athletic teammates, it is unlikely he would have made it deep into the playoffs. Shaquille O’Neal indeed knows all the main reasons the Warriors were so dominant this season.