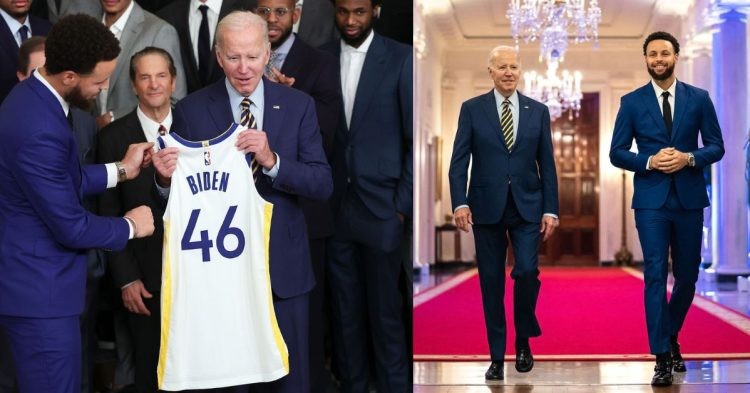 NBA fans are wondering if Stephen Curry put much thought into his attire when meeting the President Of The United States, Joe Biden at the White House. As some people might be aware, NBA stars, especially the defending champions have been invited to the White House in order to show for the President to show respect and say a few words about them.

While this is all well and good, soon after POTUS posted a picture on social media via Instagram fans noticed something peculiar about Curry’s outfit and wanted to voice out their thoughts and opinions. One should certainly be interested in knowing what fault they found with his clothes and whether there is much truth to these claims.

Fans sure have the tendency to notice and point out quite bizarre observations. Some people feel that Curry should have spent more time and effort into the tailoring and selection of the suit he chose to wear when meeting Joe Biden.

In fact, these comments have garnered quite a few likes and responses under the post. This would lead many to feel that there is some amount of validity to what fans are saying. There are a plethora of them in the comments section, “He got too much money not to have them suits tailored“. Some even took shots at Curry, “Steph needs a better tailor. It’s a photo he will frame for sure and looks disheveled“, and “I’m sorry no disrespect to Steph’s legs in this photo but it looks weird.”

A few people tried to come up with explanations for why Steph’s pants appeared the way they did, “I think it’s just the wind making it look awkward.” In any case, many have concluded that Curry simply did not put a lot of time into his fashion choices when meeting the President Of The United States.


Perhaps all of this should simply be dismissed. After all, criticizing someone for the clothes they wear not being “perfect” is something that might be looked down on. Haters will exist forever and the rest of the comments under the post proved just that. In this case, more of the negative comments were aimed at Joe Biden as people mocked him for walking behind the NBA star in this photo and claimed that he was “a follower and not a leader.”

Thankfully, nobody in the right state of mind can accuse the veteran leader of the Golden State Warriors of doing the same thing.