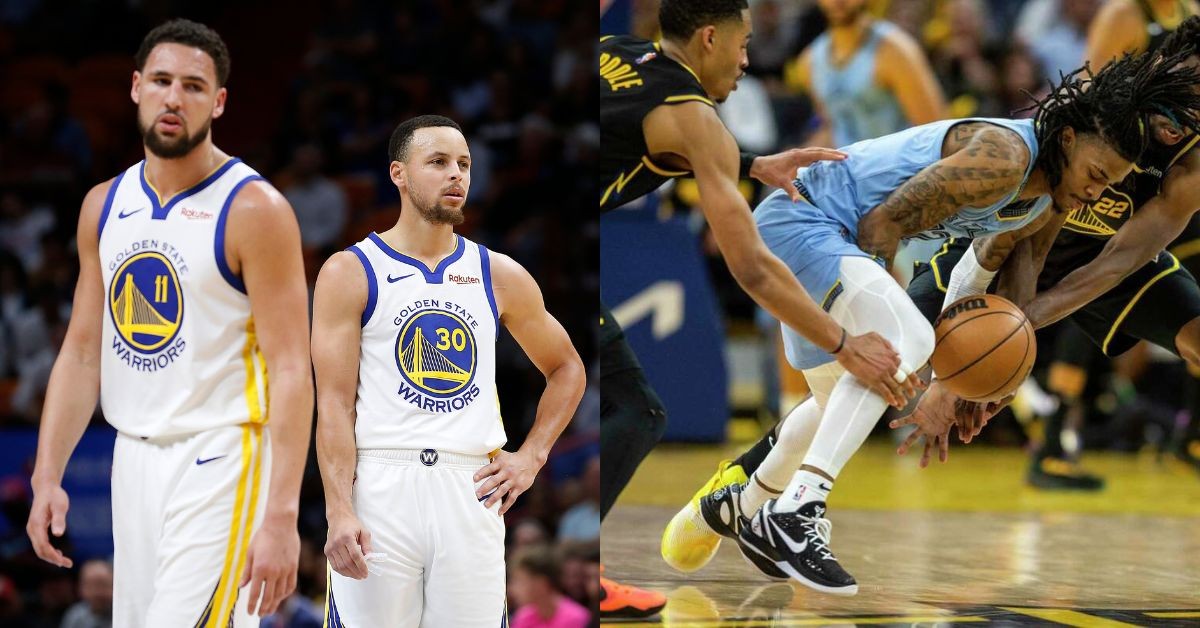 Jordan Poole grabbing Ja Morant‘s knee during Memphis Grizzlies’ blowout loss to the Warriors sparked a debate about malicious intent. Teammates Stephen Curry and Klay Thompson are of the opinion that Poole was going for the ball and not Morant’s knee.

The Golden State Warriors rallied back past the Grizzlies after a close loss in Game 2. They successfully capitalized on Dillon Brook’s absence and gave Memphis a 30-point loss in Game 3. This matchup has been unnecessarily dramatic with a suspension/ejection in every game. Draymond Green was thrown out in the first one, which was followed by Dillon Brooks and Kyle Anderson in the subsequent games.

There were multiple instances last night where malicious intent could be brought up not certainly not the play Jordan Poole was involved in. Ja Morant had bumped his knee with Klay Thompson earlier in the third and it’s highly likely that he suffered the injury in the play. Jordan Poole cleared his stance after the game.

“I was going for the ball. … I’m not even that type of player, I respect everybody. Hopefully he gets better, and we can see him out there next game.”

Jordan Poole on his incident with Ja Morant pic.twitter.com/9rbDxEbzag

The game was already very much in the bag for the Golden State Warriors when Ja Morant’s knee injury occurred. He limped off the court after making the free throws and took to the bench in agony. He played 36 minutes and had 34 points in a disappointing loss. It is highly likely that the Grizzlies star will return for Game 4 as the injury didn’t look serious.

Stephen Curry has been the center of attention for defenses for over a decade. In addition, He sees triple teams and box and 1 defense on a nightly basis with defenders attacking him throughout the game. In the regular season, he was in a similar situation with Marcus Smart that led to him losing two weeks of NBA action but he never blamed the Celtics star.

He understood Ja Morant’s situation but completely disagrees with the stance that there was any malicious intent in Jordan Poole’s actions.

Steph Curry: “It’s not a joking matter that Ja is hurt. But the rest of the conversation is BS.”

Additionally, Klay Thompson called the conversation around it dubious. He believes what Dillon Brooks did to Gary Payton II was far more dangerous. The Splash bros had Poole’s back and called out Ja Morant and the Grizzlies head coach for creating unnecessary drama.

Game 4 will take place Tuesday night at Chase center where the crowd is expected to be just as ecstatic to watch the Warriors take a 3-1 lead over the Grizzlies. But things will be significantly harder once Dillon Brooks returns.

“Oliveira Is the Champion But….”- Dana White Addresses Charles Oliveira Losing the Title and the Weigh in Controversy