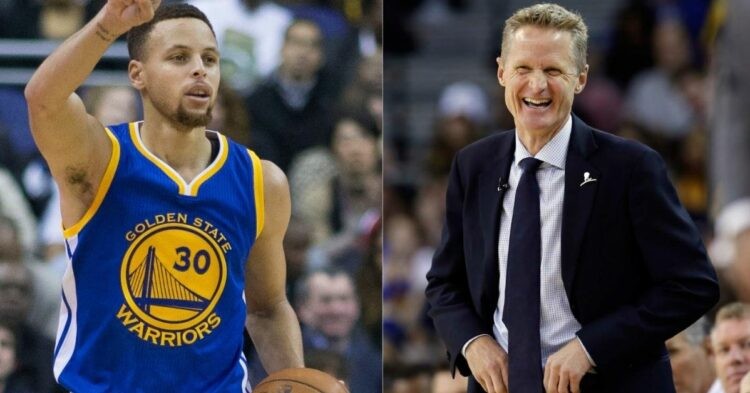 Stephen Curry and the Golden State Warriors are on the cusp of making the NBA Finals. They have a 3-0 lead on Luka Doncic and the Dallas Mavericks. The Warriors have managed to dominate this postseason using various strategies. They are perhaps, one of the most creative teams offensively.

Curry and the Warriors utilize a fluid ball movement offense. This is an unselfish form of basketball where no one player dominates ball usage rate. Additionally, the Warriors run several plays to get their star open on offense. Footage has surfaced of the latest Warriors play.

Stephen Curry utilizes a new play that leaves us speechless

Steph has changed the NBA. This is to the extent that almost no shot can be considered a bad shot. However, people overlook how crafty Curry can be when trying to get free on offense. He has shown us the latest “slingshot“.

In the play, we can see that Curry runs toward a teammate who is positioned beneath the rim. He then links arms at the elbow with the teammate and they whirl each other. This allows them to shoot out in different directions faster than expected.

This move-in in an NBA setting would clearly jolt any player from the opposition. How do you guard a man who has decided to go link arms with his teammate?. The thought process behind the move is ingenious in itself as it can make professional athletes look confused about what seems to be a very childish act.

This move may be unstoppable. However, it has ramifications that will not be clear to the audience. Firstly, it is extremely unwise to enter your teammate’s space and link arms with him. This is because both the opposition marks will be extremely free and on the move at that time.

Additionally, this move is done when Steph and Poole at times are usually off-ball trying to get free of pesky defenders. By entering each other’s space and not spreading out the floor and occupying more space, it is risky to constantly pull off. It also has a risk of injury.

If it is not clear to the less knowledgable fan. Steph cannot shoot the ball when he is linking arms and Poole cant jump. Therefore, this play is something of a wild card that the Warriors use to get something going as opposed to a standard play.