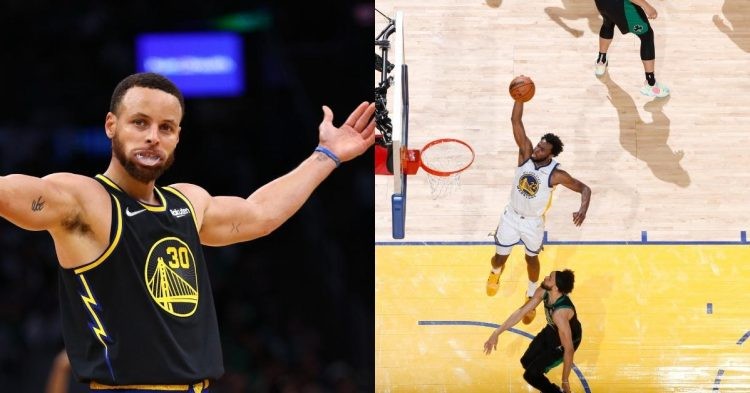 Stephen Curry and the Warriors stole game 4 from the Celtics after the Chef erupted for 43 points with 7 3PM. Leading up to game 5 every warrior not named Stephen Curry was struggling to be consistent.  Now, if you’re the Celtics then you wouldn’t be wrong to think that stopping curry will be enough to take game 5 at the Chase Center.

Well, as crazy as it may sound the Celtics were so good at shutting curry down that he didn’t even make a single Three pointer. This was also the first time that Steph was held to 0 made threes in the playoffs. But, much to the Celtics’ surprise Andrew Wiggins had other things in mind.

That was the first time ever Steph Curry didn’t hit a three in a playoff game. pic.twitter.com/d68THwpcGp

Andrew Wiggins put up 26 points on over 50% shooting and grabbed 13 rebounds for the Warriors in game 5. The Celtics had a clear plan in mind for game 5, stop curry. It was very obvious that they didn’t consider the possibility of Andrew Wiggins being the Warrior’s leading scorer in game 5.

Apart from a Wiggins masterclass, Klay Thompson also came up huge for the Warriors, he ended the game with 21 points and 5 3PM. On the other hand, it seemed like Jayson Tatum was the only Celtic that knew how to shoot the ball.

Jayson Tatum recorded 27 points for the Celtics and for the first time in this series that we saw him shoot over 45% from the field. Despite Tatum’s amazing performance The Celtic’s second-best player Jaylen Brown scored just 18 points after taking 18 shots.

But he’s not the only one to blame for this loss. The Celtics are very careless with the ball and they also struggle to hit their free throws. Additionally, The Celtics’ shot selection in the 4th quarter is poor compared to the more experienced Warriors.

Instead of focusing all their energy on Stephen Curry, the Celtics need to find a way to slow down the entire Warriors team, they also have to handle the ball way better than they’re currently doing. If they fail to do so they can say goodbye to their Championship hopes.

How Many Times Has Stephen Curry Been to the Finals?