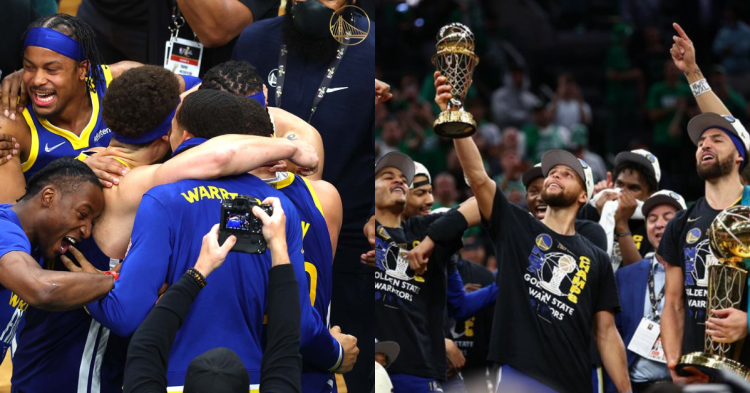 Stephen Curry and his Warriors took on the Boston Celtics for Game 6 of the NBA Finals today. The Celtics had homecourt advantage and were all set to tie the series up. But, the Chef had other plans, he posted 34 points, 7 rebounds, and 7 assists in a 13-point victory over the Celtics.

The Celtics showed some spirit but their inability to handle the ball eventually cost them the NBA Championship.

Stephen Curry and The Golden State Warriors beat The Celtics 4-2 to take home the 2022 NBA Championship. The Chef ended up winning his 4th ring along with his first Finals MVP. Steph may have been the Finals MVP but when the Warriors needed them most Andrew Wiggins, Gary Payton II, Klay Thompson, and Draymond Green all showed up and balled out for their team.

Multiple times throughout this series Andrew Wiggins came up huge for the Warriors. Gary Payton II was a constant annoyance to the Celtics team. Klay Thompson made all of his shots when it mattered most and last but not least Draymond Green acted like a true leader.

This marks the Warriors’ 4th Championship within the last 8 years and at this point, no one can question the greatness of Stephen Curry and his Warriors.

On May 21st, 2021 Stephen Curry said in a post-game presser “You don’t wanna see us next year” and he meant it.

The Warriors have put their fans on a roller coaster ride these past 3 years. Before the 2021-22 season, the Warriors even failed to make the playoffs. And this year they ended up winning the whole thing. This team has shown much perseverance to be where they are today. They had to overcome a lot of challenges to pick up this trophy today.

After going through such a difficult journey and winning the NBA Championship, Steph was overcome with emotions as he broke down in tears as soon as the final whistle blew. The Warriors will be getting a lot of praise tonight and they deserve every bit of it.