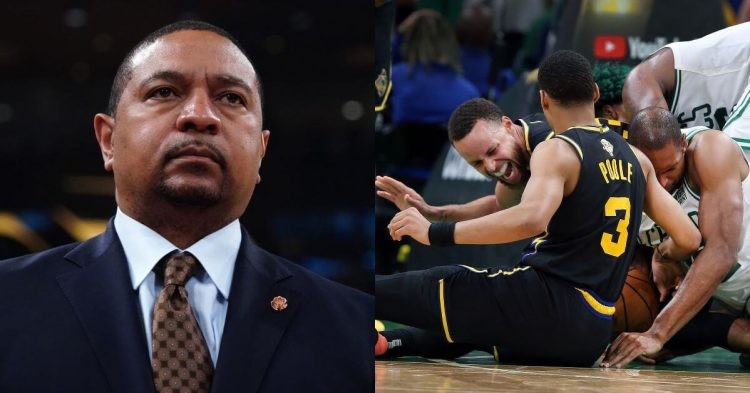 Things look dire for Stephen Curry and the Golden State Warriors. They are down 2-1 on the road to Jayson Tatum and the Boston Celtics in the NBA Finals. Additionally, Curry went down with an injury in Game 3 as control of the series seems to be slipping from the Warriors.

Golden State’s former head coach Mark Jackson is said to have been the one to “discover” Steph. After unsuccessful playoff runs he was replaced by Steve Kerr. Jackson was always at odds with the owners and higherups of the GSW franchise. As a result, he soon parted ways with the organization. He recently had a somewhat cynical take on the plight of the unanimous MVP getting injured in game 3.

Mark Jackson made a snarky comment about the Warriors’ 2017 title run during last night’s broadcast 🏆https://t.co/6lHUvPOp47

Stephen Curry went for a rebound that bounced away with about 4 minutes left in the 4th quarter. Celtics veteran Al Horford dove to the floor and seemed to land on Curry’s leg with immense force as they both tried to get possession of the ball. It was a troubling sight to see the best player in the finals go down with such a devastating-looking injury.

Mark Jackson was announcing Game 3 in Boston Wednesday night but did not show any sympathy to his former team when he said, “They won a championship because of a play like that, with all due respect“.

It may not be clear to everyone but he is referring to the time Zaza Pachulia landed on NBA superstar Kawhi Leonard and injured him for a lengthy duration of time. Kawhi was on the San Antonio Spurs, who were dominating the Western Conference at the time.

That injury changed the tide of the series as San Antonio was soon eliminated and Golden State moved on. This is what he is referring to when he means “play like that“. However, It is definitely saddening to see Curry injured and possibly compromised for the NBA Finals.

The former coach for the Golden State Warriors is rumored to have always held a grudge towards his team. He may have been loved by Steph, Klay, Draymond, and the rest of the original warrior’s roster. However, his crude methods and behavior were always a point of issue and conflict.