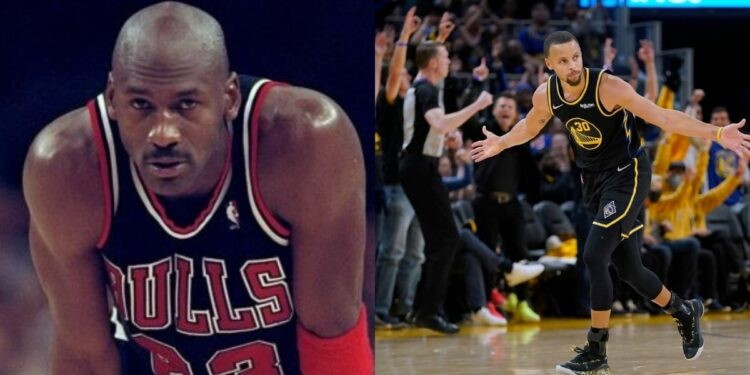 Michael Jordan helped form the Chicago Bulls Dynasty in the 1990s. They were considered the undisputed best team and MJ, the best player ever seen. However, perhaps Stephen Curry has carried the Golden State Warriors just as far as Jordan carried the Bulls.

This has been a historic season for Steph. He has established himself as the best three-point shooter in the world. Additionally, he has carried the Golden State Warriors to their 6th NBA Finals trip in 8 years.

An NBA Player is a businessman in many ways. He finds the best deals in terms of contract or destination. Additionally, if he is unhappy he demands a trade at the soonest. This has become true for the majority of NBA players in the modern era.

This is not the case for Michael Jordan or Stephen Curry. Both of them have been loyal to one franchise and spent the prime of their career with that team. However, MJ did come back and play with the Washington Wizards for a brief stint.

Steph has proved to be one of the most valuable assets for Golden State. He has been their leader and voice. Additionally, he is also down-to-earth and hardworking. Curry would be the last person to get out of a situation if it got out of hand.

Stephen Curry has carried the Warriors and has 6 NBA finals appearances in 13 years. This is the exact same as Michael Jordan with the Bulls. This is a true testament to Curry’s impact on this league.

One might wonder whether this accomplishment is worth complimenting especially when LeBron James has had 10x NBA Finals appearances.

However, it is important to keep in mind that he initially had only one appearance with the Cavaliers. He then moved to the Heat and had 4, and 4 more with Cavs again. Finally, he had his most recent appearance in 2020.

It could a topic of debate in itself. There has to be an innate value for winning potentially 4 championships with a single franchise as opposed to getting traded 3 times to win 4 rings.