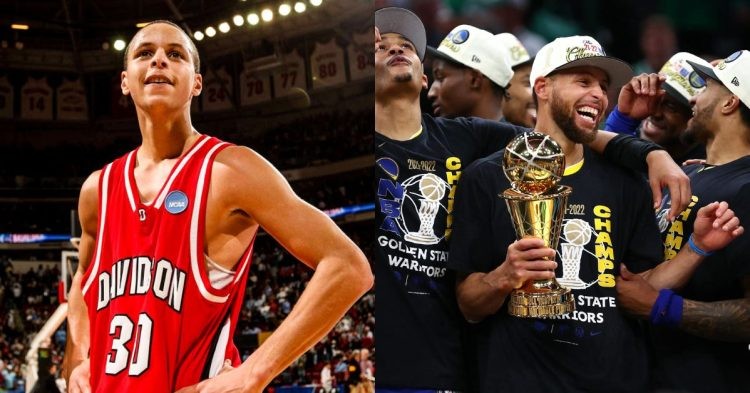 Golden State Warriors revive their dominant dynasty with a huge win in the 2022 NBA finals. The core of the 4 time NBA champions proved to the world that you can be at the top, fall and, get back to the top. It had been a long time since the Warriors won without a super team, making this win as sweet as it could be. Stephen Curry won himself a title, FMVP, and, a jersey retirement at his alma mater.

The Golden State Warriors had won 3 NBA titles in 5 straight finals appearances. Injuries and lack of depth forced them to the lottery 2 years in a row. And this season, they climbed the ranks and won the NBA title again.

Stephen Curry was yearning for a Finals MVP to cement his legacy and he got that, along with the western conference finals MVP. The entire world has changed the way they look at Steph after his heroics in the Finals.

Stephen Curry sees his jersey get retired by Davidson

While Steph Curry was dominating the NBA with his record-breaking scoring and shooting abilities, he was also putting in work in the classroom. During his collegiate career at Davidson, Steph Curry tore up the country. He averaged 25 points per game in 3 years. He also shot 41% from the 3, highlighting his dad’s teachings.

However, he got drafted into the NBA one year before he could graduate. His NBA career showcases why he did not need to regret that decision. But he always wanted a degree to add to his list of achievements. During this season, Curry graduated 13 years after leaving Davidson with a bachelor’s degree in Arts and a major in Sociology.

One of the reasons that prompted him to do this was a promise to his mother. And an incentive put forth by Davidson. His college would only retire his jersey if he graduated. And they kept their word.

Mark your calendars for August 31. pic.twitter.com/squphykfZQ

The jersey retirement ceremony and induction will take place on August 31st. On the same day that Curry will receive his diploma. It’s a great gesture to top off an incredible season for Curry. And there seems to be nothing that could ruin his high.