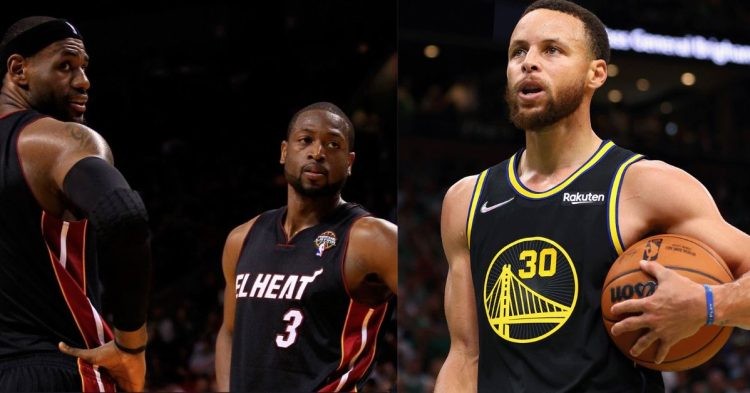 Stephen Curry‘s Game 4 performance in the 2022 NBA Finals has been the talk of the town despite being a few days old. The 34-year-old pulled up with an astonishing 43 points, especially when his team needed it the most. He also finished the game with 10 assists and 4 rebounds in just 40 minutes.

Curry’s historic game has drawn attention from many former players, notably from the all-time greats LeBron James & Dwyane Wade. They’ve both been on the same stage as Steph and know what it takes to perform like him. His performance played a pivotal role in the Warriors tying the series 2-2 after an extremely close game against the Celtics.

At this point, both James & Wade are Curry’s biggest fans after they responded to his haters post-game. D Wade had also mentioned that Mount Rushmore for basketball should be expanded to include Curry. This comment by the Flash speaks at length about the all-time 3-point leader’s brilliance.

Steph Curry on @DwyaneWade and @KingJames complimentary tweets during his game 4 masterpiece: “It means the world…it hits different when it’s people that you looked up to once upon a time…” pic.twitter.com/liR87vINa3

Curry went on to say that receiving praise from players he previously looked up to means everything to him. He was introduced to the NBA in 2009 when the Golden State Warriors picked him at No.7. LeBron & Dwyane ended up on the same team in Miami Heat that year.

Both these players were the main faces of the Heat dynasty where they reached the NBA Finals four times in a row from 2011 to 2014 and won back-to-back championships in 2012 & 2013.

Stephen Curry grew up as a player while seeing greatness unfold in front of him. He witnessed James & Wade ball out for the Heat back in the day and make history. It is evident that this helped him to be the player he is today and made him the best shooter.

The Baby Faced Assassin has also been the favorite for this year’s Finals MVP. He has consistently put up four dominant performances for GSW so far. Many believe he will be the winner regardless of the Finals results.