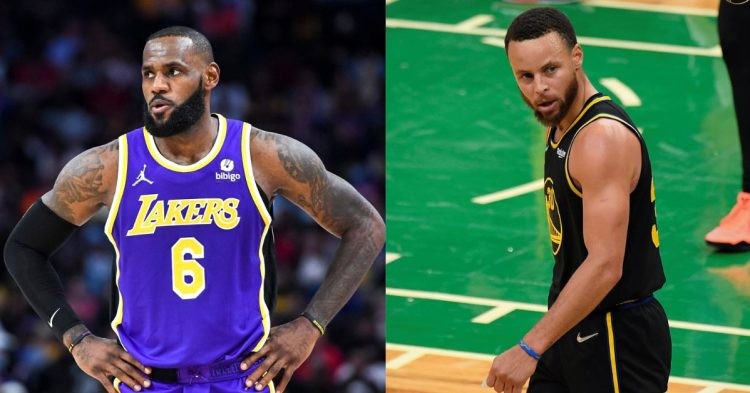 Stephen Curry had a game-changing performance in Game 4 of the NBA Finals and it was poetry in motion. He joined LeBron James to become one of the only two players in the last 20 years to score 43+ points in the Finals multiple times.

Both LeBron & Steph have been crucial to the development of the sport and they have played their part tremendously well. LeBron is arguably one of the greatest players of all time, proving his worth again and again in multiple franchises, especially his contribution to the 2016 NBA Finals comeback, against none other than Steph’s GSW. On the other hand, Steph is now known as the greatest shooter of all time after taking the throne on 3-pointers made.

Steph went cooking recently against the Boston Celtics and showed up with just Steph numbers. The American had 43 points, 10 rebounds, and 4 assists in just 41 minutes of the game. As he usually does, Curry made seven 3- pointers during his remarkable performance. One other player to have an edge over him is the one and only LeBron James. Let’s compare the two players’ stats in the Finals in these games.

Other than Steph, LeBron James has also had his fair share in displaying what the fans want to see. He has two games in the NBA Finals where he has made more than 43 points. In the first game, LeBron made 44 points in the 2014-15 season in 46 minutes. He finished the game together with 8 rebounds and 6 assists. King James also recorded a staggering 51 points in the 2017-2018 season in just 48 minutes.

The interesting point is that both of the times when LeBron showed up were in fact against Steph’s Golden State Warriors. This speaks at length about their head-to-head record and who has the edge over the other. The other time when Stephen Curry was on fire in the Finals was against the Toronto Raptors. In the 2018-19 season, the baby-faced assassin made 47 points, 8 rebounds, and 7 assists in 43 minutes.

However, Steph may not be up there with the King, but he is indeed something that we don’t see every day. He boasts a 15-7 record against LeBron in the NBA Finals in his career. If that wasn’t enough, he averages 25.7 points against James in Finals. Curry may not be on the same level as one of the GOATs, but he is the greatest shooter in the history of the game.