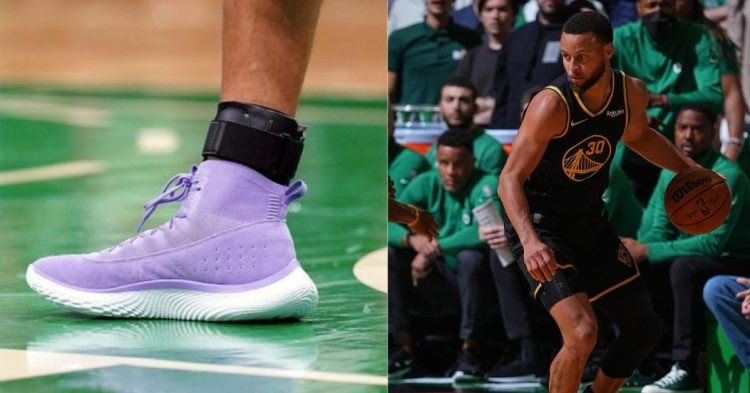 Stephen Curry put up a historic stat line in game 4 of the NBA finals. He finished the game with a 43-point double-double and helped the Warriors steal a must-win game 4 at the Garden.

Steph did all of this while wearing his Curry 4 Flowtro’s. The first time Curry wore these shoes was during the fourth quarter of the Western Conference Semifinals. Before the shoes came on Steph was struggling and only managed to put up 14 points on 18 shot attempts. After the shoes came on Steph put up 18 points in the 4th Quarter alone.

Anytime Steph brings these shoes out the Warriors win the game.

Steph Curry was asked about the shoes he wore and informed the Warriors are 3-0 this postseason in them.

Can Stephen Curry’s special shoes lead the Warriors to their 7th Championship?

The Warriors are all set to play game five of the finals on Monday. They’ll be coming back home after tying up the finals on the road. Stephen Curry erupted for 43 points in game four and the Warriors ran away with the game after some clutch Plays from the Splash brothers.

The series is tied up 2-2 and game 5 will be played at the Chase Center. If they can come away with a win in Game 5 the Warriors will be the favorites to win the Championship. But that’s easier said than done. In these finals, we’ve seen more than one warrior struggle to be consistent. Apart from Steph, Andrew Wiggins, and the Occasional Klay outburst, none of the other Warriors have been consistent contributors to this Finals Run.

One Warrior, in particular, has been continuously underperforming these finals. Draymond Green is yet to crack double digits in scoring these finals, but he’s not exactly a player that will get you buckets. When Draymond takes the floor, we expect him to make huge plays on defense while running the offense, and unfortunately, he hasn’t been doing a ton of that either.

If the Warriors have any real shot at winning this title then Steph’s supporting cast is gonna need to step it up. And if things don’t go well Steph just might have to bring out those purple shoes to win the Finals.