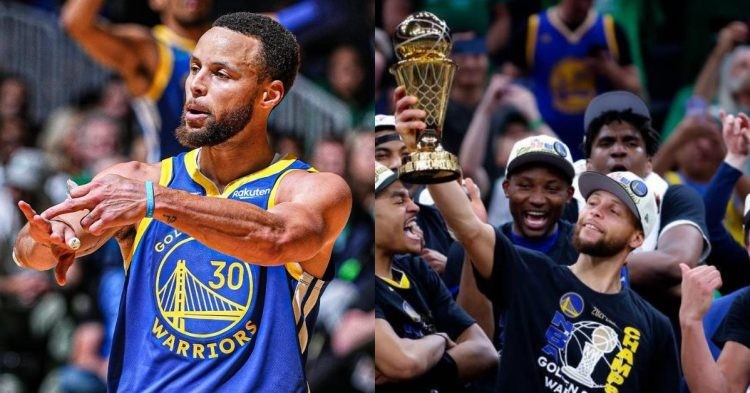 Stephen Curry and the Warriors traveled to Boston Celtics’ TD Garden for Game 6 of the NBA Finals. They returned home with a gleaming new Larry O’Brien trophy after defeating the Celtics 4-2. Steph received a small piece of extra hardware for his outstanding performance in the 2022 NBA Finals after he won the Finals MVP. This is his first Finals MVP award, as well as his fourth championship.

On an NBA court, Stephen Curry has accomplished everything there is to achieve. Additionally, he checked the final item on his bucket list after winning the Finals MVP. In the past, he has faced criticism surrounding the lack of a Finals MVP trophy in his cabinet, however, Chef has always given more importance to the NBA ring.

In a post-game interview, Steph was asked, what it means to him to finally have a Finals MVP, and this is what he had to say. “I’ve seen it up close and personal once with Andre Iguodala and twice with Kevin Durant, and to have one for myself was unlike anything else in this game.”

He went on to express his gratitude to his teammates for their support after they won. But he is still as competitive as ever, he went to a couple of young guys on the team from the podium and told them that this is just the beginning. The Chef has just completed year 13 and is looking forward to what comes next.

He believes the Warriors have a lot of room for improvement and can be even better next year. But, he did finish the statement by saying that he’s tired and getting ahead of himself and that for now, he wants to celebrate, rest, and play golf.

The Warriors put an end to what has been a magnificent season. They didn’t have a lot of believers when the season started but they have certainly proved everyone wrong. The dynasty isn’t over and the players are as hungry as ever as they believe the best is yet to come. It’ll be exciting to see what this team has in store for us next year.