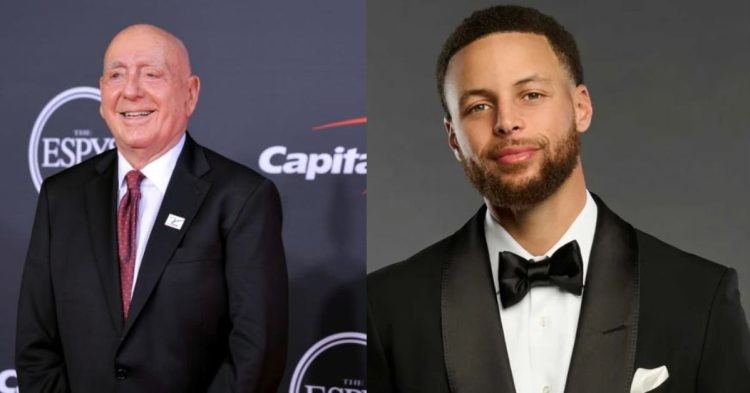 Stephen Curry proved the doubters wrong and managed to win a 4th NBA title in his career with the Golden State Warriors. This has been a great season for him as he received several accolades this year. Curry also won the Best NBA Player ESPY award and witnessed other great personalities such as Dick Vitale or “Dickie V” give speeches and share thoughts when given other awards.

Dickie V’s speech was so impressive, that the 4x NBA champion chose to show his appreciation. Additionally, Steph also commented on Instagram to give more support. One must wonder what Dick Vitale spoke about.

Dickie V is a basketball sportscaster as well as a former college head coach. Additionally, he has been a part of ESPN for more than 4 decades. He is 83 years old and was born on 9th June 1939 in New Jersey. Vitale won the Jimmy V award for perseverance and made a speech soon after.

It is not a well-known fact that he is also a cancer survivor. Illness is no laughing matter and cancer is one of the deadliest forms of illness out there. Vitale was initially diagnosed with Melanoma. This is a form of tumor associated with skin cancer. Moreover, when he finally got it removed in August 2021, he was soon dealt another bad hand a few months later.

Dick Vitale was diagnosed with Lymphoma in October 2021. This is a type of cancer that targets the lymph nodes, thymus gland, spleen, and bone marrow. An 82-year-old man beating two types of deadly cancer is quite a remarkable achievement.

His words clearly impacted the minds of his audience as they applauded his speech. Moreover, Stephen Curry chose to comment on an Instagram post of the speech “An inspiration to us all“. It is heartwarming to know that Dickie has such support from NBA stars after his incredible life struggles. Playing basketball is one thing. However, coming out of battles hoping to simply survive is an unreal feeling that Steph has not really faced.

That is one of the many reasons he may have chosen to react to Dick Vitale’s speech at the 2022 ESPY awards.