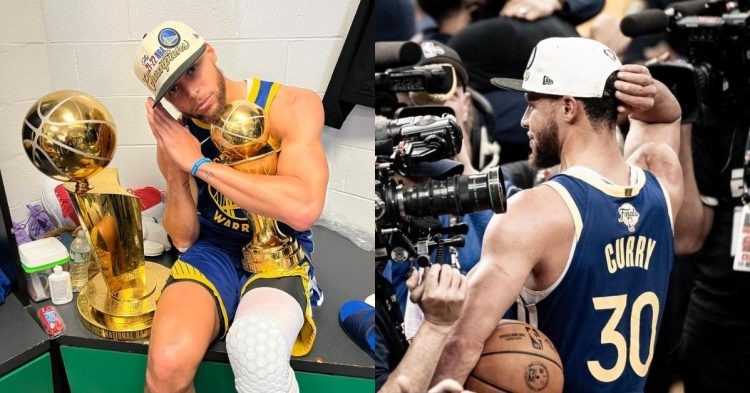 Stephen Curry hit the floor running to start his 13th season in the NBA. He led the Warriors to a hot 18-2 start despite Klay Thompson being out due to an injury. Then ultimately he led them to the NBA Championship. The Chef had a lot of people doubting his legacy before this season, but now that it’s all said and done it is safe to say that he has solidified himself as an all-time great. Let’s have a look at his legendary season.

These stats don’t even begin to define just how great Stephen Curry was this season. He elevated to a much higher level in the playoffs and after this year he now leads over almost every 3-pointer statistic, whether it be for the playoffs or the regular season.

Here’s another Ridiculous record that the Chef Holds. Apart from him, Klay Thompson is the only other player with 80+ 3PM in a single playoff series, the Splash Brothers have truly lived up to their name.

Players with 80+ threes in a single playoffs:

We can go on about his other stats all day, but now we’ll talk about a record that he had been chasing all his career. Ray Allen led the NBA in all-time 3PM before the start of this season. Steph was 142 3s away from breaking Ray Allen’s record. Now, even though the entire world regarded Steph as the greatest shooter of all time, he didn’t fully start believing in that statement till he broke Ray Allen’s record.

“I’ve been thinking about this number for a long time even got it on my shoes, basketball history, this is pretty special,” said Curry after breaking the record.He now sits alone as the only member of the 3000 3PM club.

Steph Curry in just this season:
Becomes all time leader 3pt made
Most consecutive games with a made three
All Star MVP
WCF MVP
NBA Champion
Finals MVP

This was suppose to be the year he got “exposed” pic.twitter.com/lWhvQZ8zsh

Stephen Curry is the greatest shooter of all time and has completely changed the way that basketball is played. His legacy would’ve been secure even if he didn’t win that Finals MVP award that he was constantly criticized for. And by the time his career ends he and his records will be completely out of reach.