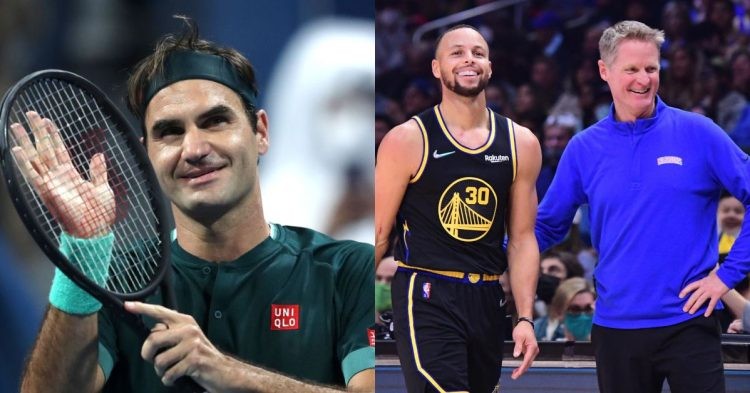 The Golden State Warriors will go into game 5 after a well-deserved win in game 4. They fixed their mistakes by tying the series 2-2 before game 5. Stephen Curry leads the team in that win being the oldest player on the team. Steve Kerr made comparisons of Curry with Roger Federer but Steph has had enough of it.

Roger Federer is one of the greatest tennis players of all time. He’s won 20 grand slams and was ranked the number 1 by the Association of Tennis Professionals for 310 weeks. That included a record 237 consecutive weeks. He has also finished as the year-end No. 1 five times in his career. Roger is currently 40 years old and is currently in recovery to get back to the level he’s used to.

Steve Kerr was a good player when he played in the NBA. He played till the age of 37 and won 4 titles during that time. When he became a head coach he won 3 more NBA titles with the Golden State Warriors. He’s had the chance to play with Michael Jordan and Tim Duncan and sees the same level of talent from Stephen Curry.

“Steph reminds me so much of Tim Duncan. When I played with Timmy there was this same vibe. This incredible, authentic humility and humor, joy behind the scenes. And then, frankly, a real arrogance on the floor like ‘I’m the best player out here.’ That’s the perfect kind of leader.”

That was right after they won in game 2. Now that they won game 4 after Steph’s 43-point game, Steve Kerr has more to say.

“You know, the Roger Federers of the world or the Steph Currys of the world. There’s a routine that is not only super disciplined, but it’s really enjoyed each day. There’s a passion that comes with it. And that’s what sustains it over time and when you love something like those guys do, you work at it, you get better and you keep just keep going.”

Steve Kerr was essentially putting Steph in league with the greats and what motivates all the greats to play hard despite their age.

“I got to get a list of all the people he’s comparing me to. Tim Duncan, Roger Federer, all added to the list.”

Stephen Curry had to stop the reporter in her tracks. He had to mention that Steve Kerr’s appreciation for him is something he can see clearly. When he heard this he was humored by the number of players Kerr keeps comparing him with.

A lot of compliments but all at the same time. However, Curry did go on to agree with his head coach to prove why he deserves to be in that all-time great discussion at all times. But who will be the next player Kerr uses to describe his star players’ greatness?

All You Need To Know About the Rafa Nadal Academy