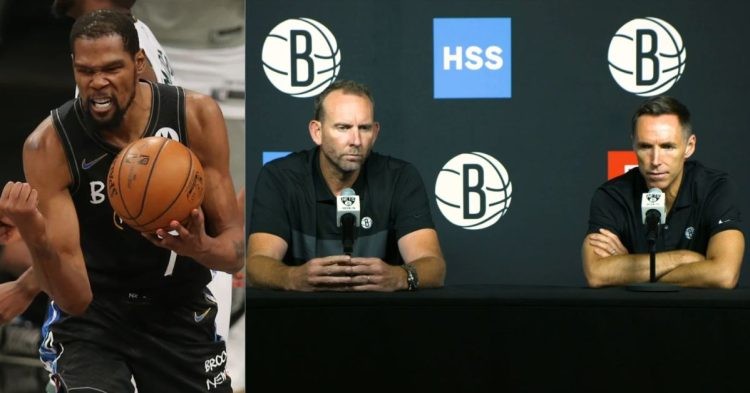 Kevin Durant is an NBA superstar and one of the most gifted scorers of this generation. He is currently with the Brooklyn Nets, the third team he has played for in his career. Durant asked for a trade in the 2022 offseason after being swept by Jayson Tatum and the Boston Celtics. Many people were under the assumption that Kyrie Irving’s erratic behavior is responsible for his decision in asking for a trade.

Steve Nash is the coach of the Brooklyn Nets. He is a former NBA player and this is the first team he has coached in the league. Additionally, Sean Marks, the general manager used to be a player as well. Kevin Durant requested a meeting with the owner of the Nets Joe Tsai. He laid down clear-cut conditions if he is to stay.

It is interesting how we never know the whole story. Based on his initial request, the media gave us an assumption that KD was leaving because of Kyrie. Moreover, Irving had decided to opt into the final year of his contract just days before Durant officially made the request. This caused everyone to speculate that there was a rift between the two stars and that they are looking to part ways.

The meeting with Joe Tsai seems to have shed more light on the situation. It turns out that Durant’s desire to leave has less to do with Irving and more to do with Steve Nash and Sean Marks. Everyone knows the coach and the GM are the two most important management positions on the team.

KD wants both of them gone if he is to change his mind and stay with the Nets. The exact details of the meeting are unclear and we do not know if Tsai agreed or disagreed with him. The 2x NBA champion does not like the direction his franchise is heading in. At this stage in his career, it is all about winning championships.

Steve Nash and Sean Marks may have their flaws, but it is unfair to blame them and leverage their careers with the organization just to fulfill the contract Durant has already signed. We will find out what response the Nets’ owner Joe Tsai will give, if he does publicly, in the upcoming days.