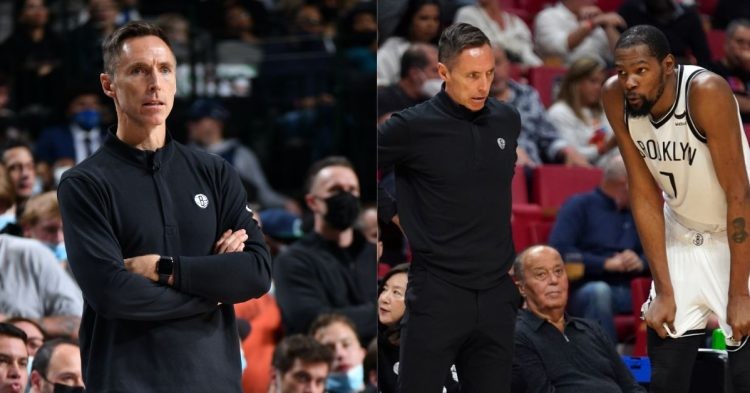 It seems to be getting more and more eventful for Brooklyn Nets fans as time passes. In recent days, Kyrie Irving had attracted all the attention after promoting a movie with anti-Semitic views. The Nets are under the spotlight once again, but this time with their head coach Steve Nash.

The Nets have publicly announced that they have decided to fire Steve Nash from the head coach position. The Joe Tsai-led organization first hired Nash in 2020. It caught many by surprise as he had no prior experience as a head coach for any NBA team. He was one of the assistant coaches at the Golden State Warriors under Steve Kerr before joining the Nets.

The Nets’ statement mentioned that General Manager Sean Marks said, “We want to thank Steve for everything he brought to our franchise over the past two-plus seasons. Since becoming head coach, Steve was faced with a number of unprecedented challenges, and we are sincerely grateful for his leadership, patience and humility throughout his tenure.”

Steve Nash’s departure from the Brooklyn Nets organization was sought-after by Kevin Durant a while ago. During the summer, KD was in the middle of a rumor festival. This was when reports emerged mentioning the American wanted to leave Brooklyn. When the franchise expressed that they weren’t prepared to let him go, Durant hit them with a shocking ultimatum.

The ultimatum was that either Brooklyn Nets should let Durant go or fire both Sean Marks and Steve Nash to keep him. The reason for that was because of how unhappy he was with the management and the direction the franchise was heading in. Durant expected a positive answer from the Nets board and Tsai. However, the latter shocked the entire world by announcing his decision to the public.

He subtly hinted that he would be supporting his office and coaching staff. This prompted many to believe that it was the end of KD’s time in the city. However, once again, they caught us by surprise. Durant ended up staying and the Nets announced that both parties were looking to work together for the benefit of the team.

That was until recently when the Brooklyn-based franchise has been performing disappointingly in the 2022-23 NBA season. After parting ways, it is still unknown where Nash is headed, but we can assume it will be a while before he takes up the role of head coach again. In his statement, Steve Nash thanked the entire Brooklyn Nets family. Moreover, he also mentioned that he will be rooting for them to turn the season around.