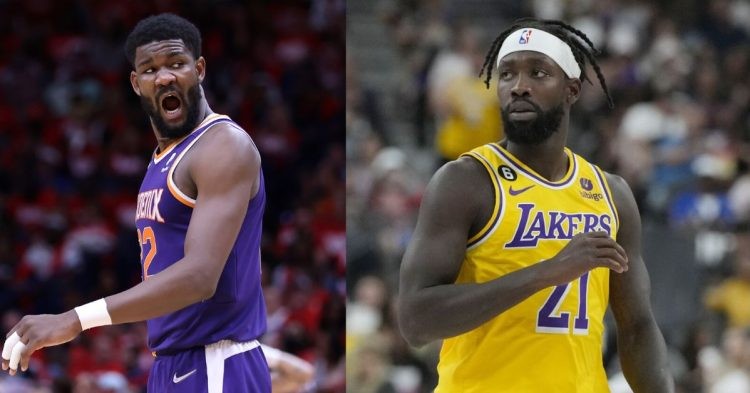 Patrick Beverley and Deandre Ayton on the court (Credit: Twitter)

NBA fans feel that Phoneix Suns center Deandre Ayton should be suspended like Los Angeles Lakers guard Patrick Beverley has. We remember that both the Suns and the Lakers have a recent history. It looks like things got quite heated during the recent match between the Los Angeles Lakers and Phoenix Suns.

We all saw what had happened. Devin Booker fouled Austin Reaves and appeared not to care. Then Ayton decided to walk over to Reaves and stand over him potentially taunting him. This led Patrick Beverly to stand up for his teammate by running into Deandre and putting him on the ground.

Some feel Deandre holds a fair share of the blame, “Suspend Ayton too” This incident occurred while Deandre wasn’t facing Pat Bev and could have been quite dangerous, potentially injuring him. Therefore, the Lakers decided to suspend Beverley and hold him responsible for this event. We should wonder what the people had to say about this and how the Lakers will handle this situation.

For how many games did Los Angeles Lakers suspend Patrick Beverley?

Pat Bev has created a notorious reputation for himself over the years. We remember when he pushed Chris Paul in the back during the 2021 Western Conference Finals. In fact, some theorized that incidents like that are why the Clippers decided to trade him in the first place.

Darvin Ham after Pat Bev gets a 3 game suspension pic.twitter.com/L6ABYtvVTB

Coming back to the present-day situation, the Los Angeles Lakers have decided to suspend Patrick Beverley for 3 games. Moreover, this suspension will be without pay. Hopefully, this shouldn’t be too big of a problem for Pat Bev as he has a net worth of around $13 million.

Patrick Beverley @patbev21 @Lakers Is a Cheap Shot Coward & Punk. He has a history of cheap shots & a 3-day suspension is not enough!

Beverly is a disgrace to @Lakers & @NBA! He should be forced into anger counseling & put on notice next time it will be a permeant suspension! pic.twitter.com/3Xn8t4X5ey

I am Patrick Beverly. Refs should have called a taunting foul on Ayton. Since they didn’t he took matters into his own hands. Reminiscent of the old NBA! Fine & suspension 🤷🏿‍♂️

Beverley might not have been giving the Lakers much on the offensive end. However, there is no denying that he brings a certain defensive tenacity and grit to the team. Fans feel like this punishment is quite extensive and Deandre Ayton should be suspended as well. However many of them are critical of Beverly and his history.

When will Patrick Beverley return?

As already mentioned, Beverley has been suspended for 3 upcoming games. Thankfully for Los Angeles Lakers fans, the team has quite an easy schedule for the next 3 games. They will be facing the San Antonio Spurs in back-to-back games and the Indiana Pacers.

Your suspension will have zero impact on the NBA but cool shove, dude.

@Money23Green Draymond should of got a ten game suspension for punching his own teammate but all green got was a timeout. @patbev21 got 3 games for protecting his teammate. Sometimes I think the @NBA is delusional. Fair is fair. If talking about past behavior. #NBATwitter #NBA

One could claim that both these teams are mid-tier at best and the Lakers will be favored. Even without LeBron James and Patrick Beverley. Hopefully, they can get back on a winning streak in this stretch. Pat Bev is expected to return for a game against Damian Lillard and the Portland Trail Blazers.