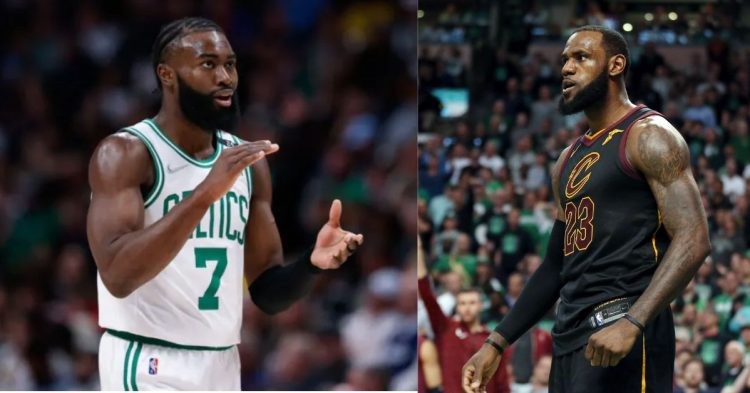 We all know there are barely any athletes in this world who can be compared to the NBA legend, LeBron James. He is entering Year 20 in the league and averaged 30 points last season. The King has seemed to show dominance for the longest time now and doesn’t really seem to be slowing down.

Boston Celtics star Jaylen Brown is all too familiar with what LeBron is capable of. He recently discussed which version of the 4x NBA champion he considered to be the best. Since Brown can now be considered a legitimate star in the league, it is important to pay attention to his opinion and understand what he has to say.

Veteran NBA fans will remember all of LeBron’s accomplishments over the years. He was first with the Cleveland Cavaliers and then took his talents to the Miami Heat. There he won 2 titles alongside Dwayne Wade and Chris Bosch. Thus, having accomplished the goal of winning titles, he returned to Cleveland looking to do the same.

The Cavs had drafted future NBA star Kyrie Irving and were no longer the same team King James left. Thus, when he returned to the Cavs they made the NBA Finals for 4 years in a row. Jaylen Brown believes that the 2018 LeBron James was the best he had seen.

“That was the best form of LeBron that I’ve ever experienced since I’ve been in the league. That 2018 LeBron was special.”

“That was the best form of LeBron that I’ve ever experienced since I’ve been in the league. That 2018 LeBron was special.”

It is very difficult to argue with the Boston Celtics star. Of course, people can make an argument that a 2012 Miami Heat LeBron was much better and they would be right. However, LeBron James did not have Kyrie Irving on his side as they parted ways after the 2017 NBA season. Therefore, we assumed the King was at his weakest and his chances of making the NBA Finals were the slimmest ever.

However, LeBron managed to will his team through the Eastern Conference and into the NBA Finals. He even faced Jaylen Brown and Jayson Tatum in order to make it there. The series was very close and went 7 games with Game 7 being held in Boston.