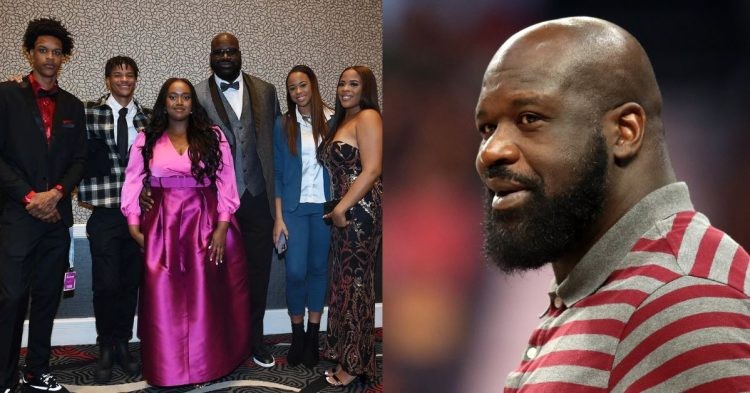 Shaquille O'Neal with his kids (Credit- The US Sun & CNBC)

Shaquille O’Neal was a great player back in the day. The former LA Lakers man made sure he cemented his status as one of the most dominant players of all time. Together with that, he was a great father off the court too. He has raised six children, three of which are boys and three are girls.

Shaquille has spoken about his children publicly on numerous occasions and the lessons he gives them. One of them included when he revealed the demands he had for their careers and love lives. Recently, he let the world in on his responsibilities as a father.

He told Yahoo Life, “The first thing I tell em is, ‘Yes, we are living like this. It’s only a small percentage that live like this.’ Then I take them around the corner to their cousin’s house and be like, ‘See what I told you. We’re here, we’re not gonna run away from it. You can keep being here, but this is what you have to do.'”

Shaquille’s net worth is $400 million as of 2022. He has built an enormous empire after retiring from the game back in 2011. If we are being honest, he was wealthy even as a player. The main reason for that would be the hundreds of millions he received through the lucrative NBA contracts.

As a father with O’Neal’s wealth and financial comfort, one would have to worry about how his children grow up. It seems like Shaq did not take any risks with that and openly told his kids that they were privileged. Kids might be ignorant of the fact that things in life do not come easy and that money doesn’t mean everything. It seems like Shaq’s kids do not have that mindset considering how their father is and what he has taught them.

“I try to teach my sons that when you’re with a woman, you have to protect, provide and love. My daughters are like my little women, so I have to protect, provide and love. So if they wanna stay at home few more years until they figure out, that’s my job as a father until they get ready to go into the world or until I pass ’em off to a husband. My boys are men. They’ve been men a long time. The boys understand,” O’Neal added.

Shaq on his children i am rich my children are not #Shaq #businesstips #MONEY #NBA #Children pic.twitter.com/pFm515GJSr