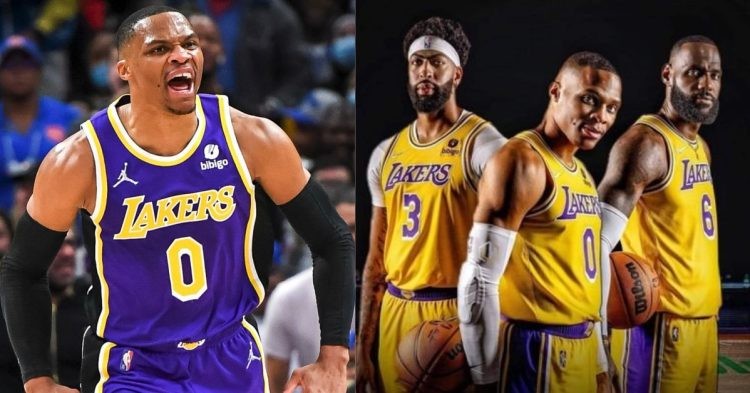 As we all know, the Los Angeles Lakers are in the middle of a rebuild. After missing the playoffs for two consecutive times in the last two seasons, they are looking to get back in form. In their history, the LA Lakers have won 17 NBA championships, the most in history along with the Boston Celtics.

In 2020, they won the title with LeBron James and Anthony Davis leading the team. It may have been a hectic year for the whole world and the NBA, but it was still a title win regardless. The next year, the franchise acquired Russell Westbrook. Since then, he has been on a rollercoaster ride with the Lakers team and its fans. Recently, the franchise signed Patrick Beverley, a player known for his defensive prowess.

Considering he was Russ’ arch-nemesis, many expected Westbrook to leave the team. However, recent reports have emerged mentioning that the Lakers organization are open to keeping him on the team if there are no teams they can do a trade with.

How can the LA Lakers lineup their team with Russ and Pat Bev?

Russ is a player who can still do some damage to NBA defenses. The Lakers looking to offload him isn’t because of the Beverley move. One of the main reasons would be the fact that Russ hasn’t been able to perform for the them since his arrival, or that’s what many claimed.

REPORT: The Lakers lean “very strongly” against the idea of sending Russell Westbrook home in case they can’t find a trade.

His arrival caused fans to be excited as they now had a world-class big three in LeBron, AD and Russ. The expectation was the Lakers making the Finals the next season.

That’s when tragedy struck the LA-based franchise. Both LeBron and Davis faced multiple injuries for two seasons in a row. It was a rarity for both of them to be fit at the same time. When they were, Westbrook could not make the chemistry work with them. Considering he was the least important of the three for many, Russ received a lot of the criticism.

Russ averaged 18.5 points, 7.4 rebounds and 7.1 assists during the 2021-22 NBA season. Considering what his haters are claiming, these numbers aren’t quite bad. He has been able to perform decently in a team where the playstyle has been new to him.

However, things could be different next season as the new head coach Darvin Ham, looks to have a promising plan. With Pat Bev also on the same team to take care of the defensive side and the pair looking to put their beef behind, the Lakers may well have a dangerous starting five next season.