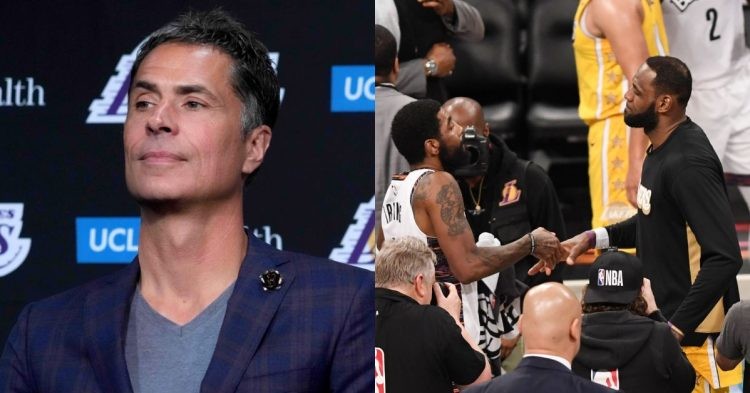 The Brooklyn Nets have imploded in front of the entire NBA and teams have been scavenging around the scraps like a vulture. With all the drama that carried into the off-season, Kevin Durant and Kyrie Irving made it known that they wanted out. And by now every team in the league knows that they can be the aggressors in the discussion. But the Los Angeles Lakers are the only team that could lose out on it from being too greedy.

Kyrie Irving and Kevin Durant wanted to change their perception of the league. They were both viewed as people who helped but weren’t ‘the guy’ on their championship teams. With all of that to prove and a great friendship, they joined the Nets. Since their arrival, due to injuries, bans, and other drama, they haven’t been able to win anything. Last season they were swept in the 1st round of the NBA playoffs which further hurt their name in the league.

Initially, it was Kyrie Irving that was ready to leave the Nets by threatening to decline his player option. Before doing so, he looked around to league to see the teams that could and would be able to sign him. And through that, the best he could find was joining the Lakers for 1/5th the salary he’d be giving up.

He decided to pick up the player option and see where the road takes him. This entire ordeal prompted Kevin Durant to ask for a trade. And Kyrie could use this to make his way out as well. Now the Nets have to trade Irving or they could lose him in free agency for nothing.

However, they still decided to focus on the Lakers, who have one of the worst deals on the table.

“Draft compensation is an ongoing talking point for the Nets and they want shooting guard Joe Harris — who is recovering from left ankle surgery — and his remaining $38.6 million owed over the next two years included in the deal, sources said…The Lakers have been disinclined to the inclusion of Harris, and are instead seeking the insertion of sharpshooter Seth Curry as part of the arrangement, sources said.”

This trade should be a steal for the Lakers. They get rid of Westbrook and his contract for a superstar in Kyrie Irving. And they also get one of the best shooters in the NBA in Joe Harris. But they are pushing to get Seth Curry, who is a much better asset.

And this could lead to the entire trade talks breaking down. Leaving the Lakers with nothing. This could be exactly the reason we can come back if the Lakers fail to win the 2023 NBA title.