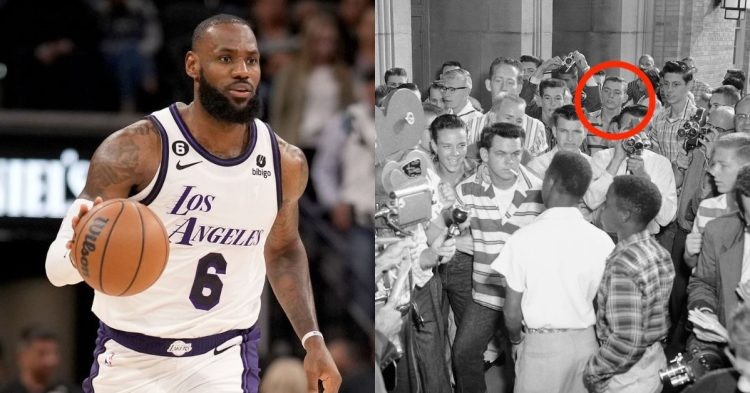 The Kyrie Irving controversy was all the NBA world heard just over a month ago. The Brooklyn Nets star tweeted a movie that included anti-Semitic views and he faced the wrath of everyone, including the media, for this decision. The Nets suspended him and he was out for a significant number of games. In addition to that, the media asked many NBA players, such as LeBron James, about the controversy at the time.

King James mentioned that the media was portraying him as a person that he wasn’t. The 4x NBA champion backed his former teammate and mentioned that he should be able to play. However, to the world’s surprise, LeBron made a huge U-turn in the situation. Despite that, Kyrie did make a return to the NBA and is currently playing for the Nets as normal.

But that hasn’t been all about the controversy. LeBron has brought up an interesting fact that has caught everyone’s attention. For those who don’t know, an image of Jerry Jones, NFL team Dallas Cowboys owner, has been going viral online. LeBron has compared this situation with Kyrie’s very recently.

What did LeBron James say about the Jerry Jones photo?

During the press conference, LeBron said, “I was wondering why I haven’t gotten a question from you guys about the Jerry Jones photo. But when the Kyrie thing was going on, you guys were quick to ask us questions about that…And I don’t even want you guys to say nothing.”

LeBron James wondered why he has not been asked about the 1957 photo of Cowboys owner Jerry Jones that recently surfaced, after the media were quick to question him about Kyrie Irving.

For context, the image has been going viral for all the wrong reasons. In the image, a 14-year-old Jerry Jones was in the middle of a group of teenagers. In the image, it looks like the group of boys is trying to stop a few young black boys from entering their school. For those who don’t know, the school’s name is North Little Rock High School, based in Arkansas.

Many have called out Jones for being a part of a racist move to keep black students out of the school. In addition to that, fans have also had a go at him. This is also because the Cowboys have not had a head coach who was black. It seems like LeBron was unhappy about the fact that the media did not ask him about this.

Kyrie Irving’s former teammate believes that the same standards should have been kept. According to him, black athletes, or any black individual with power and influence, have to face extreme consequences from the media if they do or say something that the world doesn’t agree with. However, he was left baffled that the media did not do the same for the Jerry Jones image.