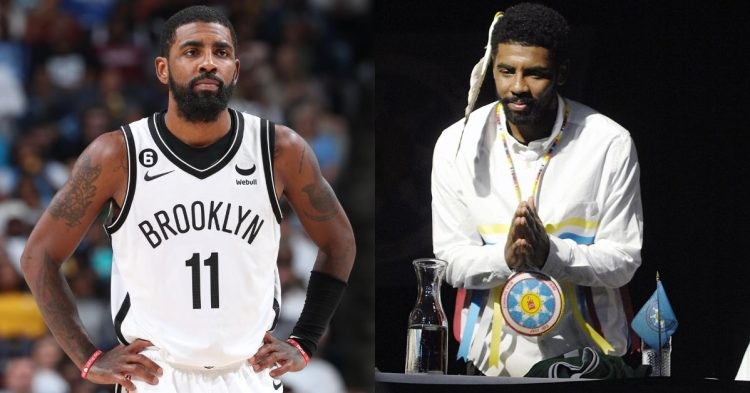 Kyrie Irving is one of the most famous NBA players right now. The reason for that would be the controversy he created after promoting a movie with anti-semitic remarks in it through a tweet. The backlash he received from many parties prompted him to issue a public apology, where he admitted that he should have done better.

His Twitter name has attracted plenty of attention in recent times. He has the name “Hela” on his Twitter profile, which many do not know the real meaning of. The interesting fact is that it is not Kyrie’s real name as many expected.

To understand the meaning and origin behind “Hela”, we have to dive deep into Kyrie’s parents’ history. The 30-year-old was born to Drederick Irving and Elizabeth Irving. Unfortunately for the Irving family, Elizabeth passed away in 1996 when she was just 29 years old. She left behind a 4-year-old Kyrie, his father, and his sister Asia.

In 2018, Kyrie decided to visit the roots of his mother’s heritage. For context, Elizabeth was part of the Standing Rock Sioux tribe until before her death. Kyrie and Asia decided to run it back to learn more about their mother’s history. The tribe is mainly based in North and South Dakota in the United States.

According to the Associate Press, Kyrie was given a name by the tribe people there. They provided him with “Hela” and his sister Asia with “Tatanka Winyan”. Kyrie’s name means “Little Mountain” and Asia’s translates to “Buffalo Woman”.

Afterward, Kyrie revealed how he felt. He said, “Our journeys have been directed in so many different ways, but yet we are still standing here embracing each other as if we haven’t lost any time. It’s really special for me to be here because I lost my mom at a very young age, and I had no idea about the history and how inclusive this group is and what it means to part of the Sioux tribe.”

In addition to that, Irving also said at the time, “This is family for me now.”

The reason why the tribe gave these names to Kyrie and Asia is not known. However, it is safe to say that Kyrie is proud of his heritage and where his mother is from. He has tattooed her name on his chest, with angel wings. In addition to that, the Brooklyn Nets star also has a tattoo of her birthday on his wrist.