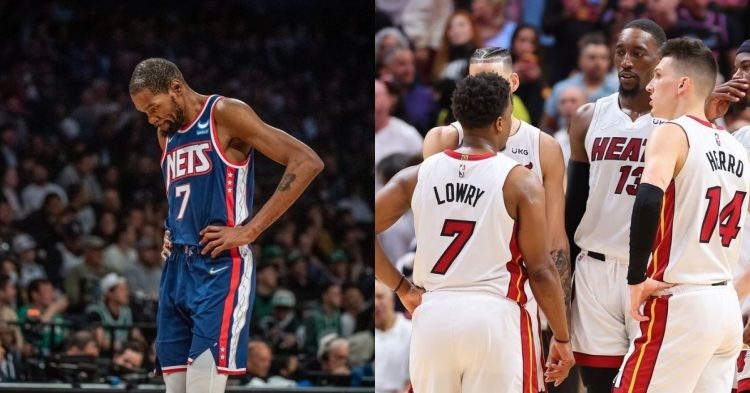 Jimmy Butler and the Miami Heat fell short of making the NBA Finals this year. They were eliminated by Jayson Tatum and the Boston Celtics in 7 games. This was despite being the top seed in the Eastern Conference and having a home-court advantage for game 7. The Heat hope to acquire Kevin Durant from the Brooklyn Nets in order to improve their chances of winning an NBA title.

Durant is considered one of the most gifted scorers in the game of basketball. He has had a dissipating season with the Brooklyn Nets as they finished as the 7th seed in the East. Moreover, they were swept and unable to win a single game against the Celtics.

One could argue that the Miami Heat have been performing well every since signing Jimmy Butler. They managed to make the NBA Finals in 2020 but were eliminated by LeBron James, Anthony Davis, and the Los Angeles Lakers. The Heat have also struggled to defeat teams like the Milwaukee Bucks. Therefore, they are looking to acquire KD in order to keep their championship aspirations alive.

The Miami Heat believe Kevin Durant gets them over the hump

Kevin Durant has been averaging 29.9 points, 7.4 rebounds, and 6.4 assists. Additionally, he has been shooting at an efficient 51% from the field and 38% from the three-point line. The Miami Heat could clearly use having a reliable scorer in Durant. This is because Jimmy Butler is unable to carry the offensive load for his team through multiple games.

The Heat was unable to keep up with teams with star duos. The Bucks had Giannis Antetokounmpo and Khris Middleton with the addition of Jrue Holiday. The Celtics had Jayson Tatum, Jaylen Brown, and Marcus Smart. Both these teams pose a serious threat to Miami and have a deeper roster as well.

Kevin Durant can fit in with the Heat because he does not need to dominate the usage of the ball. He can play off the ball and create space for his teammates with his mere presence. Moreover, he has proven to be a better defender at this stage in his career. As the Heat are known for their tenacious defense, they would not want KD if he were a subpar defender.

With all that being said, it is unclear if Miami can actually steal Durant away from the Brooklyn Nets. Any franchise will fight tooth and nail to keep its cornerstone and franchise star. This is what KD is to the Brooklyn Nets and they would be wrong to let him go.