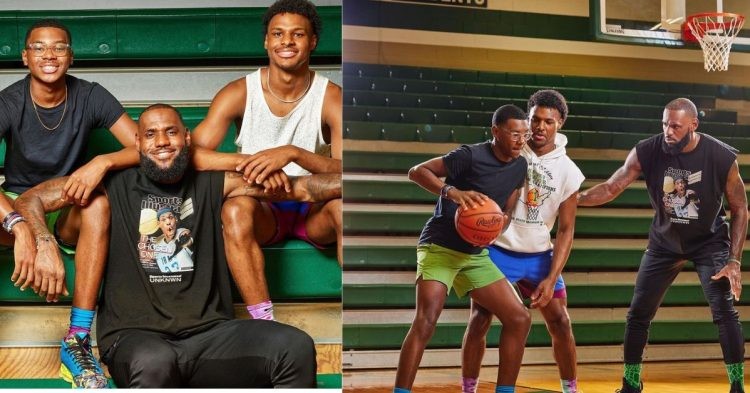 LeBron James gained a lot of followers when, as a junior in high school, he was featured on the Sports Illustrated cover.

The title of the magazine , “The Chosen One,” was printed on the front cover next to a picture of him playing basketball for St. Vincent-St. Mary in Ohio.

Twenty years later, the history is repeating itself. This week, LeBron James is featured on the Sports Illustrated cover once more while rocking a t-shirt bearing a graphic of the first issue. But this time, James and his kids Bronny James and  Bryce james were captured on camera by Jeffrey A. Salter.

Will LeBron James be able to play with both of his sons?

What has changed for LeBron over the years and what it would mean for him to be the first NBA player to share a court with his son are all shown in this insight into the life of LeBron the father and his basketball-playing boys. There are still many unanswered concerns around that, like Bronny’s NBA prospect ranking and how much LeBron’s prospective participation with him would alter his draught standing, should he decide to turn pro. Nevertheless, LeBron has made his intention known in the open.

Bronny acknowledges his desire to play in the NBA, but he is not relying on it. “I’ll see what happens. I’m going to be playing basketball. If [I] go down that path, then it is what it is.” If the NBA doesn’t pan out, “I’m cool.”

If LeBron fulfils his desire of joining Bronny or Bryce on the court, the family will create NBA history as the first father-son team. Only three other parents have participated in games alongside their sons in the four major sports: Tim Raines (MLB), Ken Griffey (MLB), and Gordie Howe (NHL).

The NBA  star just signed a two-year, $97.1 million contract extension with the Lakers, keeping him in Los Angeles through the 2024–25 season. Given that Bronny will be eligible for the 2024 NBA Draft and that LeBron has the option of becoming a free agent that summer, the deal fits with his aspirations to play with Bronny for at least one season. The time to play with both of his sons can be ideal depending on how things turn out.

LeBron says “I do the math—2027?—and nod at Bryce. Is there a chance you’d stick around for this guy, too?” He smiles and proceeds “I feel like I could play for quite a while. So it’s all up to my body, but more importantly, my mind. If my mind can stay sharp and fresh and motivated, then the sky’s not even a limit for me. I can go beyond that. But we shall see.” The star will turn 38 by the end of this year.