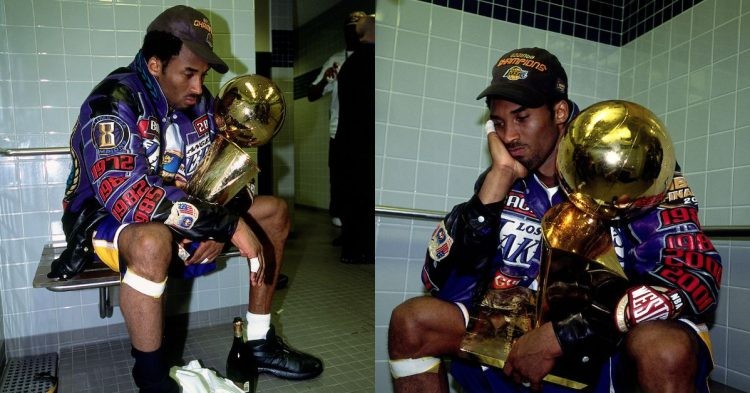 Kobe Bryant was one of, if not, the biggest name in modern basketball history. He ushered in this millennium with the teachings of former greats but the hunger of a rookie. After he passed away in a terrible helicopter crash in January of 2020, lesser-known stories of his started to surface. One of which is apt for the 21st Anniversary of Kobe Bryant’s 2nd NBA championship.

21 years ago today, this iconic photo of Kobe was taken after the Lakers won their second straight NBA title 🐍 @NBATV pic.twitter.com/wV3qIJBfmu

The Black Mamba played for 2 decades in the NBA. He was one of the youngest players to be drafted to the NBA at the age of 17. His dad, Joe ‘Jellybean’ Bryant also played in the NBA but Kobe Surpassed him fairly easily. In the 1997 NBA season, Kobe was an all-star despite playing just 1 game as a starter that whole season. He also went on to win 5 NBA titles and one MVP among a truckload of other achievements.

Shaq and Kobe also had the most impressive playoff run of all-time this season. But all of this did not stop Kobe Bryant from crying by himself in the team showers. It gave us his most iconic picture but Kobe was not weeping tears of happiness.

“The falling out occurred in 2000, though neither Joe nor Kobe talks about it publicly anymore. At 21, Kobe got engaged to 18-year-old Vanessa Laine, whom he had met on the set of a video shoot when she was a high school senior. Joe did not approve. The problem, according to the Los Angeles Times, was that Joe was “uncomfortable that Vanessa, a Latina, is not African-American, and he is uneasy with selfless devotion to her.”

Joe Bryant did not approve of Kobe Bryant’s relationship because she was not from the same background as they were. This drove a wedge so deep that Kobe’s parents skipped out on his wedding. This all coincided with the title run and Kobe could not hold it back anymore. Bryant and Vanessa were married for nearly the entire career of Kobe and she never left his side, no matter how bad times got.

“That was about my dad.”

Kobe Bryant and his relationship with his parents only got worse. It got to point that Kobe had to sue his parents because they were selling away important parts of his life at auction for millions of dollars without consenting him. As much as everyone loses the picture, this story puts things into real perspective.