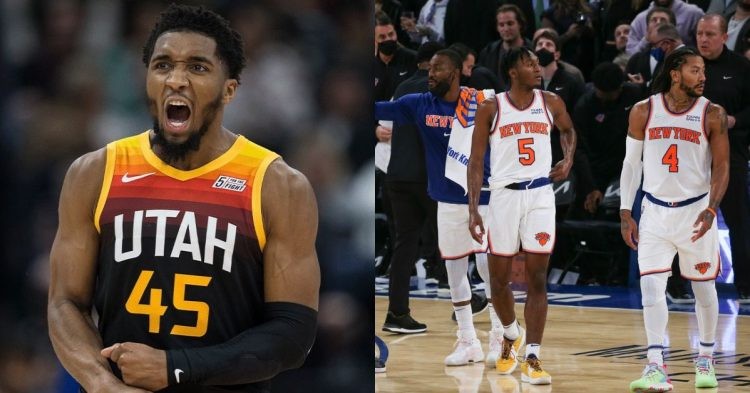 There aren’t many young talents better than Donovan Mitchell in the NBA currently. In the 2017 NBA Draft, the Denver Nuggets drafted him at the 13th pick. But they chose to trade him to the Utah Jazz right away for a 24th pick option and Trey Lyles.

Since then, Donovan has been one of the best players for the Jazz. He has featured for them in 5 seasons till now, at just 25. Not many young players can say that about their experience while keeping up the same level of performance. His highlight reels show how versatile he is as a player with his defense, dribbling, and shooting abilities.

In his time with the Jazz, Mitchell has averaged 24.3 points, 4.5 assists, and 4.2 rebounds in 384 games. If we think about it, those are decent numbers for any player. But the “Spida” has still years left in the league for him to improve.

Recently, reports emerged saying that the New York Knicks have reopened talks with the Jazz. The Knicks have been after Mitchell’s signature for a while now. Earlier, the Jazz caused the talks to be put on a halt with their demands.

After several weeks of no conversations, the Knicks and Jazz recently re-engaged in trade talks centered on Donovan Mitchell, sources tell me and @Tjonesonthenba.

The Utah Jazz is currently looking to rebuild their team. With Mitchell, they could start on a high note. Considering his stats, where he has averaged at least 20 points in his five seasons in the NBA, he would be the face of the Jazz. It is still unknown whether the Jazz board will be willing to give up their best player in the middle of a rebuild. If they are willing to do so, it will surely be for something huge in return from the Knicks.

The Knicks and Jazz have re-engaged in talks on a Donovan Mitchell trade. There is no traction on a deal & no trade is imminent, however.

The Charlotte Hornets & Washington Wizards are also in pursuit of Mitchell.

Apart from the Knicks, the Charlotte Hornets and Washington Wizards are also looking to get Mitchell’s signature. Both of those teams have the draft picks and young players that the Jazz is looking for. Despite all that, the Knicks have still been the frontrunners in the race till now.