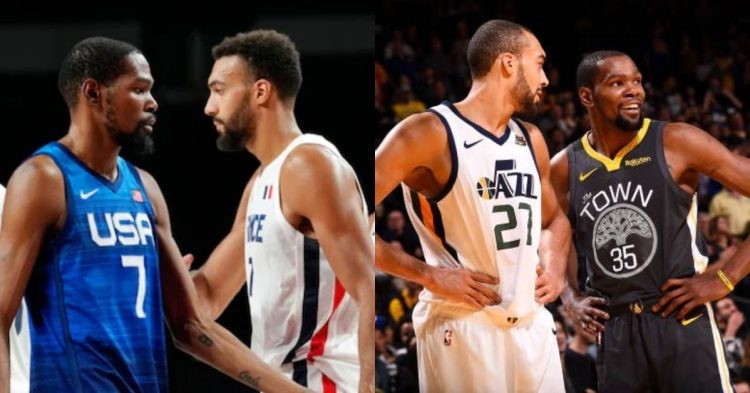 It’s day 2 of the NBA free agency period. And the NBA witnessed another massive shift. The Minnesota Timberwolves acted desperately to trade for 3-time defensive player of the year Rudy Gobert. This trade was one that we saw coming for a while but the assets involved are something we didn’t expect. Also, this trade might have just affected the Kevin Durant trade packages that the Brooklyn Nets will now be willing to accept.

Rudy Gobert was drafted by the Denver Nuggets as the 27th pick in the 2013 NBA draft. He was traded away to Utah on draft night. In his first season, the Frenchman averaged just 2 points per game despite playing 45 games that year. However, since then, he has been able to transform himself into the best defender the modern NBA has ever seen. But he’s a one-dimensional player that lacks the offensive capabilities of a winner and hence, he was merely an after-thought when they shipped him away.

How did Rudy Gobert affect the Kevin Durant trade?

Rudy Gobert is a 3-time NBA all-star and a 3-time defensive player of the year. He’s made 6 All-defensive teams and 4 All-NBA teams. He is also one of the best shot blockers and rebounders in the league. But for all the good, he also has flaws. And that’s his offense. He has never averaged more than 16 points per game in his career.

Gobert is extremely passive and has never averaged more than 8 shot attempts per game. For context, Curry averages more 3-point shot attempts per game than Gobert does in the whole game. You could ask why that’s a fair comparison and I will reply by saying it’s because of his $200+ Million supermax contract.

When the Timberwolves traded for Gobert they gave up Malik Beasley, Patrick Beverley, Jarred Vanderbilt, Leandro Bolmaro, number 22 pick Walker Kessler and four first-round picks to the Jazz. This was Minnesota massively overpaying to fix their defensive problem. But this kind of package in past years could have landed you an Irving or Beal type of player. This trade has now inflated the value of superstars in the NBA.

Kevin Durant is the biggest superstar on the Trade block. Even though he has picked the 2 teams he wishes to go to, it’s the Brooklyn Nets that hold the final say. Nets owe Durant nothing so they would pick the best package offered to them. But with the news of how desperate teams can get, Brooklyn will be expecting at least 5 valuable players and 5 first-round draft picks to even begin the discussion.

There are not many teams in the NBA that have the assets to pull this off. They would have to give up their entire future for an injury-prone 33-year-old superstar. But with desperation becoming a looming cloud, we could see someone match the offer expectations. That’s something, we will hopefully see unfold in the coming days.