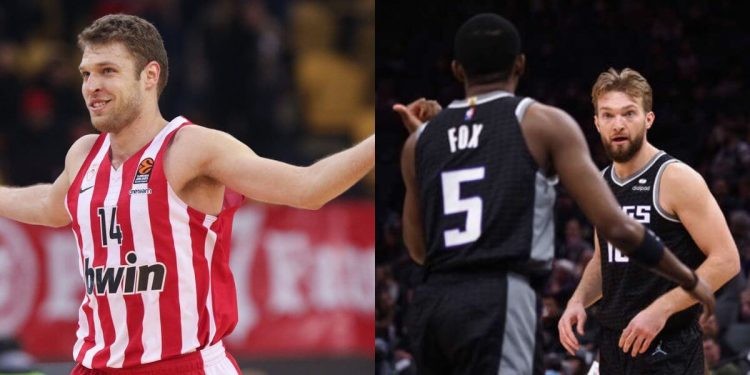 As the 2022 NBA Draft is upon us, the Sacramento Kings have made a move to potentially acquire an international player. Sasha Venzenkov is a Bulgarian basketball star. He is a player for Olympiacos. This is part of the Greek basketball league. The Kings have shown interest in the European player and have traded the rights to their second-round pick in order to potentially draft him.

It is important to note that the Kings are only giving away their second-round pick. Not their pick in the first round. Therefore, they will also have a player from this draft class.

The Sacramento Kings must believe Sasha Venzenkov is the future

It is interesting to see that the NBA is changing. It is primarily dominated by American players. However, international players have come into the limelight in recent times. Venzenkov has played in both the Greek basketball league and the Euro League. This played a pivotal role in the Kings potentially giving the 6’9 power forward a chance.

Cleveland is acquiring Sacramento’s pick at 49 in tonight’s NBA draft for the rights to Sasha Vezenkov, sources tell ESPN. Vezenkov, 26, was a first-team All-EuroLeague forward this season. He was the 57th pick in the 2017 NBA Draft.

Luka Doncic and Giannis Antetokounmpo emerged from similar leagues. They have gone on to carry their teams deep into the postseason. The Greek Freak won the 2021 NBA title. While Doncic has carried the Dallas Mavericks to the Western Conference Finals. They have both shown tremendous potential and skill. Moreover, they have managed to change the fortune of their franchise.

One could argue that the Sacramento Kings are one of the most forgotten teams by the media. This is also because they rarely manage to claw their way into the postseason. It must be painful to be a Kings fan. They have failed to even make the playoffs, going all the way back to 2006.

The owners and higher-ups of the franchise must be looking for a change. They have a guard with potential in De’aaron Fox. Additionally, they traded for Domantis Sabonis from the Indiana Pacers. This indicates that they are clearly not satisfied with the way things have been going so far.

The Sacramento Kings must believe they are due for some good luck. Sasha has been averaging 14.9 points, 6.6 rebounds, 1.8 assists, and 1 steal in the Olympiacos. Moreover, he is 26 years of age and can be considered a fully grown man. This will likely mean he finds it easier to deal with the physicality younger players struggle to handle in the NBA.