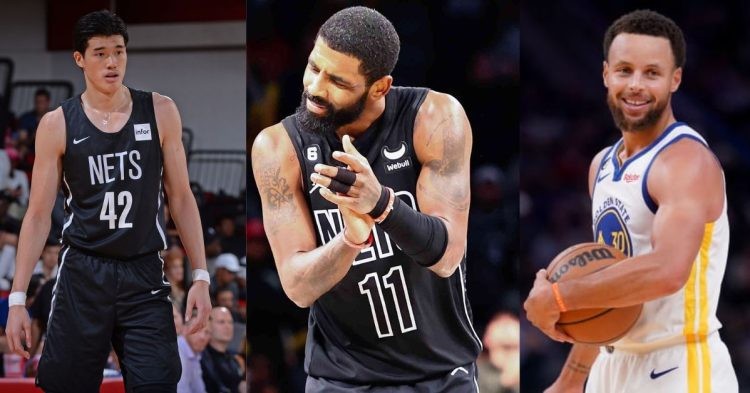 Brooklyn Nets star Kyrie Irving might just have taken a shot at Stephen Curry. He did so inadvertently by complimenting his teammate. Some of us might have already heard of a Nets player named Yuta Watanabe. He is of Japanese descent and is currently playing his 5th year in the NBA and 1st season with Brooklyn.

We should certainly wonder what Kyrie had to say and how this can be viewed as slighting the Golden State Warriors’ point guard. We have to look into what Yuta has been doing this season in order to derive an explanation and understand the context of Irving’s statements.

There has always been a lively debate on who the greatest NBA player is. Some say it’s Michael Jordan, others claim LeBron, and a few even name other greats. However, there is much less debate amongst NBA fans that Stephen Curry is the greatest shooter the league and the world have ever seen.

Certainly, there have been other great shooters. But the fact remains that Curry’s shooting ability is simply otherworldly and efficient. This season he is shooting 52% from the field and 44.4% from the three-point line.

Speaking from a purely statistical perspective Kyrie is telling the truth. After all, Watanabe is averaging a ridiculous 57.1% from the three-point line, a whole 13% higher than Curry. Numbers certainly don’t lie. However, that doesn’t always mean they show the full picture.

These numbers clearly tell a very different story. What makes Steph great is the fact that he knocks down shots even in the most unrealistic of situations. While Watanabe has simply caught and shot the few three-pointers he has attempted this season.

To those who are interested, Yuta has attempted an average of 3 three-pointer attempts a game and made 1.7. Steph is attempting 11.6 threes and making 5.2 of them.

Finally, there is also a huge difference in how these players are viewed by the opposing defense. We should wonder if Irving took all of this into consideration before proclaiming Yuta to be the best shooter in the world.